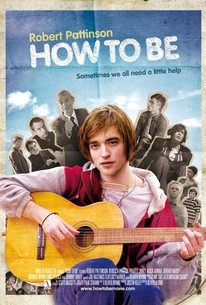 How To Be Photos

Officially an adult but locked into a perpetual phase of arrested development, an aimless twentysomething attempts to make sense of his go-nowhere life after being dumped by his girlfriend and forced to move back home with his parents. Art may still be far from mid-life, but no one can deny that he's having a crisis. When his attempts at establishing himself as a sensitive singer/songwriter fail, Art dips into his inheritance money in order to experiment with a variety of new-age therapies and hire an eccentric self-help guru. Gradually, Art begins to make sense of the dysfunctional relationship he shares with his frustrated parents, and understand the unique role he plays in his small but close-knit social circle. ~ Jason Buchanan, Rovi

John White
as Ronny
View All

Critic Reviews for How To Be

An astonishingly irrelevant piece of work...

A kind of problem child with whiskers bitten by love in this delayed coming of age family dyfunction outing, Pattinson impresses with his broad range, while doing daffy and despair at the same time.

Fans who love 'RPattz' even more than Edward Cullen should be satisfied. They'll be the only ones.

Filled with British humor so dry that it's down-right parched. (Still, if you're a big fan of Robert Pattinson, I suspect you won't be disappointed.)

Audience Reviews for How To Be

In answer to the question, "How To Be?" my suggestion would be "less boring and trite". Undoubtedly, this film proves what may have been lost in all the "Twilight" glitz: Pattinson can't act his way out of a paper bag. It's astonishing how his lack of talent is distinguishable even among the troupe of hack actors surrounding him in this movie. From bad lighting, to amateurish sound, to abysmal hair and makeup, there is almost no bottom to this fail-bag of a film.

It was reported that this film is a dark comedy.. i guess it falls under that category.. I found this film to be very awkward. I felt myself covering my eyes cause I was embarrassed for Robert Pattinsons character Arthur. The fact that his parents have him so messed up and believing there is something wrong with him that he goes as far as to hiring an therapist to come stay with him and to try and fix him.. I felt so bad for the guy.. His parents are awful.. I would dread my life as well if those were my parents.. Its got some funny moments.. Some odd characters.. Its a film worth watching..

Not bad. Heard mixed reviews on it - I didn't think it was awful, or fantastic. Full marks to Robert for doing something totally different than what he is typecast in by the Twilight movies. I don't think anyone would call him a pretty boy here, although obviously if you look past it all, he is good looking. Here he plays a depressed young boy who is going nowhere in life and has a horrible family. The film is reasonably short at 80 minutes and follows his journey out of the rut. It seems fairly low budget and quite likable once you get used to it (took me about 20 minutes to warm to it). Unusual characters, though possibly not for the average Twilight fan to enjoy.

How To Be Quotes