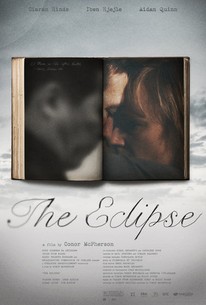 Michael Farr is a widower living in a misty Irish seaside town who is struggling to adjust to his new role as the sole caretaker of his two children. Still reeling from the death of his wife, he has been plagued by terrifying apparitions. When he volunteers at a local literary festival, he finds he finds himself drawn to Lena Morelle, an empathetic author of supernatural fiction. While Lena tries to help Michael with the mystery of his nightmarish visions, she must contend with problems of her own -- she's being jealously pursued by a self-obsessed novelist, her one-time lover. As the three adults' lives converge, the turbulence of the phantom world will soon have nothing on that of the living.

News & Interviews for The Eclipse

View All The Eclipse News

Critic Reviews for The Eclipse

The Eclipse is wholly, if strangely, cinematic; its dream-like tonal and narrative unpredictability, interspersed with a few completely jarring horror-film moments, make for an experience that will, yes, haunt audiences for a long time to come.

The whole thing would probably have flown apart if not for Hinds, whose character, like a dark star imploding, pulls everything toward him.

Quinn, alternately charming and loathsome, is brilliant, as is Hinds, an actor who has elevated everything he's been in.

McPherson brews a strangely appealing composite, a movie that is mostly character-driven romance but that seasons the proceedings with timely scare-your-pants-off moments of horror.

Unfortunately, writer-director Conor McPherson's lame attempts to push the film into the realm of a horror movie reduce its effect considerably.

In his quiet house hung with portraits of those who have become ghosts, Michael finally learns to mourn, and we realize that storytelling is how a writer grieves.

When the ghost story moments are in the forefront, it manages a strong and creepy sense of foreboding. I just wished that would have been the focus from beginning to end.

When the ghost story moments are in the forefront, the film does manage a strong and creepy sense of foreboding.

Quiet, subtle and tocuhing, this drama of a widower is extremely well acted by Hinds and Aidan Quinn

No, this is not The Eclipse where Monica Vitti and Alain Delon fail to rendezvous on Antonioni's empty street corner.

The story is thin, but it has a kind of easy Irish charm.

Audience Reviews for The Eclipse

It's a funny thing when you watch something on the screen that seems entirely plausible and yet you don't believe it for a second. This is the rot that ruins this small film that celebrates (albeit in a somewhat odd manner) all things Irish. Here you have two stories going on, and really two types of film at war with each other - a character driven, gentle story of a man trying to adjust to life without his wife, and the occasional creepy, gotcha, type of horror film. The two cannot coincide, which is one of the film's flaws, but has nothing to do with the unbelievability factor. No, sadly, what is unbelievable is the odd love (and it isn't really love at all) triangle between Ciaran Hinds' character Michael (the aforementioned widower), Aidan Quinn's arrogant, needy American Author Nicholas (and why is it that the smarmy guy always has to be the American?), and Lena, a Brit writer of the ghost story which gives the film its name. While one can certainly nod ones head and admit that yes, everything that happens between the three is grounded in reality - for some reason it just doesn't play real, especially the scene where a drunken Quinn challenges the quiet and stoic Hinds to fisticuffs. Yes, it could happen, and yes it probably would play out as the amateurish match that follows, but there's just something about the whole thing that's off putting and out of place; just as the ghost story doesn't really dovetail well with the rest of the film. There's a huh? scene that takes place in the cemetery of an old ruined church to consider. Lena asks Hinds if he's ever imagined what it would look like to have your name on a headstone. Hinds replies that he doesn't need to imagine as he points out his father's grave (and you discover that Michael is a junior). Lena then awkwardly asks if Hinds' wife is also buried in the graveyard and Hinds replies, "no, she's somewhere else." A moment later we are shown that, indeed, Hind's wife is buried in the cemetery after all. I suppose we are to surmise that Hinds is saying that his wife isn't really dead at all - as she "haunts" (and that's a pretty loose term in this instance) him and is therefore alive to him as she controls his life by leaving him in a permanent state of melancholy. I really understand that Hinds character is broken, and that Quinn's is just a needy boor who somehow thinks he's entitled to whatever his minds craves at that moment. He doesn't really care about Lena, just thinks he does, and her denial makes him want her all the more, like a child who is told that he can't have an ice cream cone. But does this make for riveting film watching? Sadly, no. I mentioned earlier that the film is very Irish. By that I mean it comes across like a Dylan Thomas poem, taking its time as it weaves its tapestry. It shows the slow filling of an empty room and all sorts of imagery meant to convey feeling and atmosphere, but come off, at least in my mind, as rather simplistic and overstated. The film takes the time to recite a passage out of Lena's ghost novel, which reveals a certain tone and theme concerning the belief in ghosts, but also comes across as a "look what I wrote" bit of ham fisted screenplay. The ham fistedness continues when Hinds' father in law states that, while he knows the sadness of losing a wife, losing a daughter makes you wonder if there is a god. Of course he is looking out the window at the church across the street as he utters this little pearl of wisdom. The film also contains a scene in which Hinds is driving Lena and she exclaims "oh, what beautiful scenery, can we stop." I'm sure the Ireland Board of Tourism appreciated the gesture, but I'm certain that they could have found, or filmed a more breathtaking bit of scenery to display than what they actually showed. A letdown, just like the film, in spite of the solid performance by Hinds.

A surprisingly effective dramatic ghost story. It has some genuinely creepy moments and some good jump moments along with real dramatic tension. It's also wonderfully and beautifully filmed. I'm gonna keep an eye on this director and see what else he has to offer.

Cast: Ciarán Hinds, Iben Hjejle, Aidan Quinn, Dorothy Cotter, Eanna Hardwicke, Hannah Lynch, Jim Norton, Hilary O'Shaughnessy Director: Conor McPherson Summary: In this supernatural thriller penned and helmed by award-winning Irish playwright Conor McPherson, Ciarán Hinds stars as a recent widower who begins to sense that a mysterious presence is sharing his house. Iben Hjejle and Aidan Quinn co-star as a pair of novelists whose worlds converge with that of the widower thanks to an international literary festival in Wexford that brings surprising changes to all their lives. My Thoughts: "The atmosphere in this film is quite dark, beautiful, and at times a bit creepy. The film is not a horror flick by no means, and they say its a thriller. I feel it's more of a drama with a splash of supernatural mixed in. I will admit the movie made me jump more then twice. I love a movie that takes you by surprise like this one did me. I thought it would be a bit cheesy like so many other supernatural films are, but I am happy to be wrong. Although the story seems to be told quickly, the film moves in a slow manor, which I think fits the film. Great acting by all. I really enjoyed the story and really felt for the father. His grief near the end was quite sad. The concept of seeing the ghost of a loved one before their death is definitely creepy, and in a sense quite scary. If you believe in that sort of thing. I think it would be horrifying knowing its going to happen before it actually does. I don't think anyone would want to know that. All in all, I found the film to be a nice surprise. I liked that although supernatural things are happening, it didn't over take the film. The only complaint I would have, is that some of the scenes are a bit too dark. But besides that, its well worth the watch."

Far be it for me to turn my nose up at a horror movie, but The Eclipse is host to the most distracting attempts to jolt its audience that I've ever seen. It's not that the movie creates a particularly dark atmosphere or even story that might lend some credence to these few macabre twists; they are literally cheap, out of place jump scares meant to remind us that we should be paying attention to the movie during its more introspective moments. The most egregious of these, falling near the end, has the especially unfortunate timing of coming right before its main character's emotional catharsis. Literally seconds before it. It serves as a side-by-side portrait of The Eclipse's greatest weakness: it can't make its good ideas work together. When it's not a poorly told ghost story, it's a tale of finding romance after tragedy and picking up the pieces. At this it does quite well, in part due to the efforts of Ciaran Hinds and Iben Hjejle. They both seem like quiet, observant people, illustrated by Hjejle's reluctant sashaying through the limelight and Hinds' unassuming personality. The moments these two share together are tender and perfectly timed, a truly intimate look into the connection that blossoms between two older wallflowers. Aidan Quinn, as the boorish American novelist who antagonizes the relationship at several turns, encounters more problems both in his performance and in his character. Assessed technically, he's shouty and overblown, and not really in places where the role calls for it. His character, Nicholas Holden, is rotten in ways far too obvious for an otherwise subtle romantic subplot. The Eclipse finds a perfect place for him in a fantastic dinner scene between him and Hjejle about half an hour into the movie. We see him as a pompous try-hard who is nonetheless affected by the moments he's shared with her, a characterization that would have served the movie much better than the bombastic drunk he transforms into within the next hour. (And on that note, given his interpretation of drunkenness, I don't think Quinn has ever been drunk in his life.) The Eclipse is unwound by its unsubtleties. The admirable silence of much of the movie, even while working in tandem with its beautiful if occasionally disorienting shadowy photography, doesn't really tell us as much as the shitty jump scares and the explosive yelling and fighting. It's almost as if Conor McPherson was afraid of making a boring movie and whipstitched in some ersatz conflict. The Eclipse is not boring, but it's sloppy and unfocused, which in light of its strengths makes it simply disappointing.