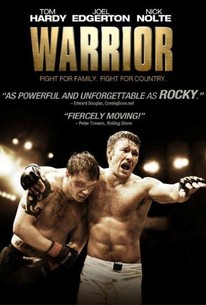 Critics Consensus: Warrior relies on many of the clichés that critics of the genre love to mock -- and it transcends them with gripping action, powerful acting, and heart.

Critics Consensus: Warrior relies on many of the clichés that critics of the genre love to mock -- and it transcends them with gripping action, powerful acting, and heart.

Critic Consensus: Warrior relies on many of the clichés that critics of the genre love to mock -- and it transcends them with gripping action, powerful acting, and heart.

Haunted by a tragic past, ex-Marine Tommy Conlon (Hardy) returns home for the first time in fourteen years to enlist the help of his father (Nick Nolte) to train for SPARTA, the biggest winner-takes-all event in mixed martial arts history. A former wrestling prodigy, Tommy blazes a path toward the championship while his brother, Brendan (Edgerton), an ex-fighter-turned teacher, returns to the ring in a desperate bid to save his family from financial ruin. But when Brendan's unlikely, underdog rise sets him on a collision course with the unstoppable Tommy, the two brothers must finally confront each other and the forces that pulled them apart, facing off in the most soaring, soul stirring, and unforgettable climax that must be seen to be believed. -- (C) Lionsgate

Bryan Callen
as Himself

Sam Sheridan
as Himself

Dan "Punkass" Caldwell
as Himself

Tim "Skyskrape" Katz
as Himself

Jonathan Matthew Anik
as Himself

Rashad Evans
as Himself

Stephan Bonnar
as Himself

Michelle Brown Mooney
as Herself

The characters are honest and true, the fight sequences are brutal and raw, while the central themes being delivered in the denouement pack a major emotional wallop.

Its three leads certainly deserve consideration for their artfulness in being able to infuse it with intimations of quality.

Carries you along despite its obvious faults and pretensions

Has to conform to the lunkhead straitjacket of the tournament format: one dufus pounding another in extreme close-up for what seems like an eternity.

Hardy's physicality here is something to behold: you wonder how many personal trainers he worked his way through to get those neck muscles.

Through a few powerhouse performances, Warrior shows how tough it is to break the strong family bond even when family members are estranged.

A hidden gem. One of the greatest sports films of all time. [Full review in Spanish]

Instead of one person's journey to redemption, you have a pair of brothers. Two underdog stories for the price of one.

A great movie about family... forgiveness and how we reinvent ourselves.

A compelling drama that develops well the personalities and motivations of its two main characters - and even though the plot is driven by several coincidences and we know exactly from the start where it is going, we end up rooting and deeply caring for the both of them.

What starts out slow with plenty of family drama between the fights soon becomes one of the most engaging and exciting sports films of recent years. You get to know the characters and start to care about them. After the training montage at half-time, the film has you by the throat and doesn't let go. Even if you're hardly interested in mixed martial arts fighting, like me, the characters, storytelling and cinematography draw you in, shake you and won't let you go until you leave the ring as exhausted and happy as the winner of the big tournament. The film's smartest decision is to keep away from stereotypes in its characterization of the main fighters, therefore making it impossible to predict the outcome. A film that starts and ends with a song by The Nation can't be bad, right? This one's even excellent.

It`s a hard knockout with fist, feet and heart. A spectacular and heart-pounding action-packed drama. A masterpiece. Director, Gavin O`Connor crafts a wonderful, fierce and moving combination of stunning martial arts action and powerful drama. An incredible and deeply moving film. A true tour de force that`s a must-see. It has you standing up and cheering. A breathtaking and inspiring piece of work. This is one hell of a strong and unforgettable movie that pulls all the punches and then some. The characters are well drawn and the performances are convincing and gripping. A tremendously entertaining action-packed ride. Tom Hardy and Joel Edgerton are electrifying, they give some impressive and heart-wrenching performances. Edgerton and Hardy give career making performances. Nick Nolte is superb, one of his best performances ever in this film. Their chemistry feels so real and hits all the right notes. Frank Grillo is outstanding. This movie grabs hold of you by the heart and dose not let go until the very end. For over two hours you will be held spellbound by this astonishing movie.