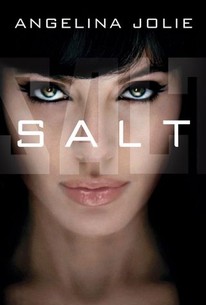 Critics Consensus: Angelina Jolie gives it her all in the title role, and her seasoned performance is almost enough to save Salt from its predictable and ludicrous plot.

Critics Consensus: Angelina Jolie gives it her all in the title role, and her seasoned performance is almost enough to save Salt from its predictable and ludicrous plot.

Critic Consensus: Angelina Jolie gives it her all in the title role, and her seasoned performance is almost enough to save Salt from its predictable and ludicrous plot.

As a CIA officer, Evelyn Salt (Jolie) swore an oath to duty, honor and country. Her loyalty will be tested when a defector accuses her of being a Russian spy. Salt goes on the run, using all her skills and years of experience as a covert operative to elude capture. Salt's efforts to prove her innocence only serve to cast doubt on her motives, as the hunt to uncover the truth behind her identity continues and the question remains: "Who Is Salt?"-- (C) Sony

Andre Braugher
as Secretary of Defense

Though the film and the script may have flaws, Jolie has none.

Can an action film have too much action? It sounds unlikely, like a cheese being too cheesy, but here's Salt to show us different.

It's pacy, smart, subversive and knocked out with such verve and attack that you're not in the least bit bothered by how far-fetched it all is.

By no means a classic, but nonetheless a job well done.

Have your summer blockbusters been lacking a little punch? If so, sprinkle them with Salt.

Noyce cleverly keeps us guessing, but we know that just as the protagonist' truth is built upon lies, so too is the film's heart - exciting, yet empty and full of glaring holes.

The filmmakers determine to double-cross, triple-cross, and quadruple-cross both Salt and the audience to the point that few will be able to root for the title character.

It's a far cry from Jolie's best.

"Salt" may not be as smart as it wants to be, and there are some enormous problems with the script and the direction, but if you go in looking for an entertaining action flick, and not an elaborate psychological mind-game, it's worth watching

Pretty thrilling chases, but just a standard espionage flick with no real substance. Orlov killing Mike to test Salt's allegiance seemed like it could go somewhere, but Salt flinches just enough for the audience to notice but apparently not enough for Orlov to, which is unsatisfying for the love angle and too easy for the test.

Don't know why but actually I pretty like this movie, especially because of Jolie factor and the element of surprise that this movie about to gave although I can predict it by the beginning of the movie.. But as a movie that made for entertainment only, this movie quite entertaining especially for men to look some action plus Jolie!

Somewhat enjoyable action thriller, Salt for me was one of those films that I didn't expect much from, but came out of it enjoying the film quite a bit. Although not a perfect affair, the film is quite good for what it does, and it's a highly entertaining action film that will surely grab your attention from the first frame onwards. I expected to really not enjoy the film, but to my surprise, the idea here is quite good, despite the fact that it's nothing ever too original. If you can suspend that, you might like the film. Compared to other films that Angelina Jolie has made over the years, this is one of her better ones. Compared to the likes of The Tourist and Mr & Mrs. Smith, I much preferred this film. The story moves at a fast pace, and there is enough action here to thrill the most hardened action film fan. Salt is a good film, a film that has exceeded my expectations and the cast here deliver some impressive performances to boot. There are better action films out there, but Salt isn't that bad either. I personally feel that it deserves a bit more praise because it's a fun, entertaining film that is worth seeing if you enjoy the genre. Angelina Jolie is quite good here, and despite the script's apparent flaws, Jolie makes things work, and in turn Salt ends up being an engaging action film well worth seeing despite its imperfections. The film's isn't as bad as what critics have said about it, and for what it is, it's an engaging action thriller that despite its flaws manages to be a fun film to watch in order to kill time.

Fun and exciting. An interesting twist at the end. It's just fun for a Friday evening...and Jolie's nice to look at!