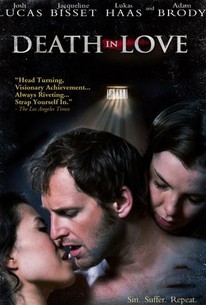 Critics Consensus: Death in Love has the depth of its convictions, but not even the game efforts of a talented cast are enough to overcome this drama's stilted story and unlikable characters.

Critics Consensus: Death in Love has the depth of its convictions, but not even the game efforts of a talented cast are enough to overcome this drama's stilted story and unlikable characters.

Critic Consensus: Death in Love has the depth of its convictions, but not even the game efforts of a talented cast are enough to overcome this drama's stilted story and unlikable characters.

Writer/director Boaz Yakin explores the burdens carried by the descendants of those who survived with this family drama about a woman (Jacqueline Bisset) who managed to live through her harrowing stint in a Nazi concentration camp, and her two dysfunctional sons. Having managed to survive in a Nazi concentration camp by seducing the doctor who carried out experimental surgeries on the prisoners, a young Jewish woman moves to New York and starts a family. Years later, her two grown sons seem poised to become casualties of their mother's desperate past. Her eldest son (Josh Lucas) works at a fraudulent modeling agency that profits off the dreams of fame seekers. His psychosexual escapades and intellectual diatribes act as a barrier to the outside world, yet just when it seems that his life has lost all meaning, a charming young co-worker (Adam Brody) helps him to realize that in order to survive, he will have to embrace change. Meanwhile, the highly erratic mother and her younger son (Lukas Haas) have become locked in a compulsive, co-dependent cycle that now threatens to consume them both. ~ Jason Buchanan, Rovi

Elizabeth Newman
as The Waitress

News & Interviews for Death in Love

View All Death in Love News

Critic Reviews for Death in Love

Posing as a study in evil, Death in Love is claptrap that confuses bile with art.

Say what you will about Boaz Yakin's epically awful Death in Love, but it wastes no time letting you know what you're in for.

Death in Love is occasionally pretentious but always riveting.

Yakin and his cast are up to the job, but the current they tap into is so charged it proves overpowering. Still, their bravery is commendable.

There's something seriously wrong when you assemble actors this good -- and can't believe a single stilted word coming out of their mouths.

How do you explain a movie as hermetic and perverse and ultimately repugnant as Death in Love?

Even as the frustrated audience can already see the truths, secrets, and manipulations congeal around the characters, they seem impotent to stop being victims.

A strangely indulgent and highly personal film seemingly crafted less as a piece of entertainment than a work of expression from an increasingly conflicted artist.

The story of miserable people living miserable lives without redemption, humor or hope.

A raw and uncompromising drama with considerably limited appeal ... leaves a lasting impression, though it's rarely easy to watch.

The failure of the movie is hardly attributable to Lucas, or co-stars Jacqueline Bisset and Lukas Haas. I'm afraid the blame rests squarely on the shoulders of writer-director Boaz Yakin.

A fascinating mess: sprawling, passionate, conflicted, confused...It may not be a film with a lot of clarity to its vision, but it definitely has vision, which is rare.

Audience Reviews for Death in Love

For the record, the last thing a beautiful naked woman(Morena Baccarin) wants to deal with is a man(Josh Lucas) in the middle of a midlife crisis, causing her to get dressed and leave, leading him to masturbate himself to sleep. He's not the only one not getting any, as his younger brother(Lukas Haas), a talented but emotionally disturbed pianist with weird eating habits, suffers under the thumb of their controlling mother(Jacqueline Bisset), a Holocaust survivor. So much so, that the older brother cedes control of his apartment to him, forcing him back into the workplace of a semi-legit talent agency where he meets the new gun(Adam Brody). As "The Night Porter" proved decades ago, trying to combine sex and the Holocaust can only move a film into exploitation territory no matter how artsy you think you are. And that's especially the case with "Death in Love" that also has predictability and ponderousness amongst its sins. On the plus side, it valiantly tries to explore the connection between the body and the soul with some memorable images like the opening montage of sex and dissection and rabbis preparing bodies for burial. The older son wonders if his mother has a soul(he puts it much more crudely), considering how cold hearted she seems. That attitude actually allowed her to survive the Holocaust intact, but in the movie's eyes, it also somehow makes her complicit in its crimes.