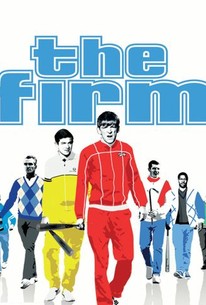 Critics Consensus: Nick Love's remake of the 1989 original has enough warmth, humor, and -- of course -- violence to make The Firm worthwhile.

Critics Consensus: Nick Love's remake of the 1989 original has enough warmth, humor, and -- of course -- violence to make The Firm worthwhile.

Critic Consensus: Nick Love's remake of the 1989 original has enough warmth, humor, and -- of course -- violence to make The Firm worthwhile.

Centers on Dom, a young wannabe football casual who gets drawn into the charismatic but dangerous world of the firm's top boy, Bex. Accepted for his fast mouth and sense of humor, Dom soon becomes one of the boys. But as Bex and his gang clash with rival firms across the country and the violence spirals out of control, Dom realizes he wants out--until he learns it's not that easy to simply walk away.

Camille Coduri
as Shel
View All

Critic Reviews for The Firm

The Firm is hardly calculated to convert those who find Love's work brash, clichéd and empty, but there's a good deal of warmth and humour here.

Love's second movie about hooligans marks a quantum leap forward from the messy, senseless violence of 'The Football Factory'.

While it doesn't exactly break new ground thematically, this is Love's most accomplished film to date. Like the terrace heroes who are its subjects, it's as good-looking and stylish as it is dangerously seductive.

Love's films have, in the past, brought me out in a rash - but this one is watchable. It's well made; there's a persistent and welcome undercurrent of humour in the script that reminded me of Love's sparky debut, Goodbye Charlie Bright,

The odd thing is that Love's version feels so bright and breezy, as if he's cosying back up to a wider audience who were turned off by Outlaw's grimy nihilism. If that's the case, it's a wacky choice of subject, but the effort's appreciated.

The film is covered in talent, including Love's, of the sort that makes you look forward to the next thing they do. Here, you feel they have a lot to climb over, but there are scenes where the attempt to get close to something real is powerfully inspired.

A watchable, but disappointing, movie that brings nothing new to the serious topic it addresses.

It's all ridiculously clichéd and over the top, yet once you give up taking it seriously and surrender to its relentless blokeishness, The Firm proves to be an enjoyable Shane Meadows-lite ride with a bit of wideboy charm.

Love's film is ultimately pointless, having nothing new to say on the issues of male bonding, acceptance and tribalism.

Love seems happier with his affectionate re-creation of the early '80s than with exploring the contradictions at the heart of this subculture.

A redundant compendium of blokeish cliches.

While The Firm is slick, evocative and very violent, Love supplies yet further proof that hooligan movies have gone about as far as they can.

Audience Reviews for The Firm

Expected allot more from this film, I was expecting a better version of The Football Factory after better reviews but it was bland and boring and never has any plot to keep the film going forward.

20/08/2010 I enjoyed the hard-knock dialogue, it was quite entertaining to listen to. Well, the fact is it's not good morally, but it's a good flick to see why it's not good to do what it is they did, you know wha' I mean? Another one of those "done before" films but hey, same drink different bottle and label. All I know is that it's a brutal flick with maybe a message, maybe, who knows what they're really trying to teach and encourage. Full of violence and wit, dudes with no care in the world may give it a fiver, but I still have my screws. Not a fiver for me but a definite alright watch. With witty dialogues that pack as much of a punch as the brutality in the story.