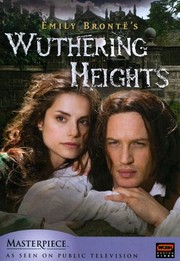 Sarah M
½ August 13, 2018
This missed the mark...it took away the haunting, romantic beauty of the book. It was diluted and drape.

Katherine N
June 16, 2018
Wuthering Heights (2008): I think I just ran out of hearts and stars to give for this two-parter. You'll just have to see for yourself.

James B
November 6, 2017
Watchable but very much a made for tv adaptation of the book. It doesn't have the darkness, cruelty and madness of the original novel, the ending is also different.
I love Tom Hardy as Heathcliff he captures his tortured persona well, but the character is much more sadistic in the novel to the point it's hard not to loathe him!
They very much tamed it for this tv version.

Sherry L
June 26, 2017
Have watched this many times. Tom Hardy is my favorite Heathcliff by far. The sexiest man alive for my money!

Ari S
April 23, 2017
This two part film based on the best selling book is intricate with many layers and characters but holds true to a few centralized human themes. Such as hierarchy, love, respect and decency. The simplicity of what class you were born in this time is essential to everything that unfolds. The film is rooted in a love story that runs so deep that not even death can keep one from the other. Tom Hardys mesmerizing portrayal of anti hero Heathcliff is so engaging you won't be able to keep your eyes off him. He endures more pain and suffering than any human should in a life time not just physically but mentally. As he enters a high born family he is treated with malice, hate and unwanted except for the love and kindness of 1 person. Hardy begins to turn all of his resentments, malice and hate into vengeance which eventually consumes him and what he wanted all along. His performance is hauntingly beautiful and singularly captivating while hard to bare. His loss of innocence into despair is felt by the audience. Highly recommend to anyone who's a Hardy fan.

Scott W
December 5, 2015
Remember as being good. Not as good as original

Naomi G
½ October 21, 2015
Andrew Lincoln should stick to the zombies.

Shireen H
½ March 8, 2015
Well made and beautiful (thanks to Tom Hardy) movie, but depressing so I give it 2.5 stars. 2nd generation Cathy is able to fight off the obsessed, codependent, bullying Heathcliff. Her mother Catherine wanted to but could not, instead letting guilt overcome her. This story does not leave a good impression of adoption and foster care.

February 7, 2015
This was a fairly good adaption of a great book. It followed the story well, except that it left some minor things out and it made some of the characters older at times then they were supposed to be.

Tom H
September 8, 2014
One of Tom Hardy's best roles. He nails Heathcliff. You can see the genuine love between him and his now partner Charlotte.

Janelle G
½ June 25, 2014
A beautiful well played out novel, with the perfect actors, who portrayed the characters in the story effortlessly.

Alejandro R
June 9, 2014
I've never read the classic book, but I know there are numerous film adaptions. This is the only one I've seen and I really enjoyed this PBS Masterpiece Classic. It's an intensely tragic drama and Tom Brady gives a brilliant performance. The acting all around was great, wonderfully shot and the story is excellent. Really causes me to want to read the book.

P. P
June 2, 2014
A decent (albeit truncated) adaptation of the novel. I'd have loved a full length version without time constraints! The writers did augment the adaptation to make Cathy and Heathcliff more sympathetic. This was a good call. Seeing Wuthering Heights on screen made me acutely aware of Victorian class differences and how these constraints contributed to Heathcliff's bitterness and nihilism. Not as good as Pride and Prejudice, but Masterpiece Theatre does a pretty good job of adapting a beloved classic. No small task, to be sure!

Brynn H
June 1, 2014
Not my favorite Wuthering Heights movie but even though its super depressing Heathcliffe and Cathy are my favorite love story....

Dustin I
April 23, 2014
Dark and gothic romance with gorgeous and carefully calculated performances!

Allen G
March 2, 2014
Plenty of great performances from the strong cast on show make this, rather slow-to-start, adaptation of the classic work live up to its name as the story develops with fire and vigour.

The best reason to watch this one is probably the relationship between Hardy and Lincoln as they both bring powerful and fierce performances to their, much in opposition, characters. Lancashire and Gorman also give stand-out performances and most of the characters featured here just seem to be in good hands really.

The story itself (this film served as my introduction to it) was very much what I was hoping for- dark, emotional, complex, and intense. There's some great dialogue and it just feels finely-crafted as a whole, though I feel that the story would have been better served had it featured in chronological order as opposed to beginning near the end as it were.

Due to its moody and brooding nature, I imagine that quite a few people will find it overbearing but I'd recommend it to anyone anyway as it has the depth of emotion to leave an impact big enough to justify all of the drama.

Length-wise I think things are about right here- it doesn't seem to drag on but I imagine that it doesn't skimp on the material either so it feels like a strong adaptation overall.

I'd argue that the film could have done with some more oomph visually as, while dour and dingy, the setting never felt particularly gothic or tragic to me as I think it should have but it's all minor quibbling really.

A strong telling of a story that's certainly worth your time and the cast manage to make this film version of it worth a watch also. If you've no real interest in the cast though then I might suggest reading the book instead as, while it's a fine adaptation, the story just feels more suited towards the page than the screen at times but I should read the book before I say that, I suppose.

Murali B
½ March 1, 2014
Classics are generally inaccessible because of the dated language. Actually I loved this adaptation.

Tom B
October 16, 2013
An absolute masterpiece! They did a remarkable job on the adaptation of Emily Bronte's novel! Tom Hardy, as always, is just fantastic! Beautiful locations, too!
Page 1 of 8