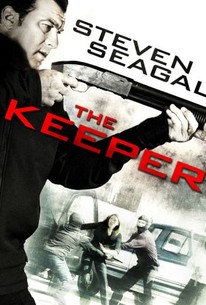 A former Los Angeles cop must recue the girl he was hired to protect after she is kidnapped by a gang of ruthless mobsters. Rolland Sallinger (Steven Seagal) was a good cop, a trait his corrupt former partner viewed as his Achilles Heel. Forced into early retirement following a bitter betrayal, Sallinger goes to work as a freelance bodyguard. Subsequently hired to safeguard his gorgeous daughter of an influential businessman, the tough protector must fight his way up through the underworld after his charge is abducted and held prisoner by the most feared syndicate in the city. ~ Jason Buchanan, Rovi

Critic Reviews for The Keeper

Bad even by his recent standards

Audience Reviews for The Keeper

There are no featured audience reviews yet. Click the link below to see what others say about The Keeper!