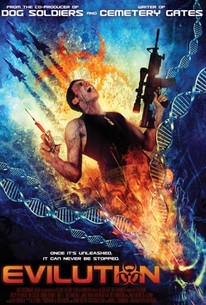 When the United States Army attempts to turn a microscopic extraterrestrial organism into a powerful military weapon, they inadvertently unleash an apocalyptic hell on Earth. It was one of the most incredible discoveries in the history of mankind; a miniscule life form that possessed the power of life over death. But when the military attempted to engineer a genetically altered version of the organism, it turned on them. The intent was to resurrect fallen soldiers to create the ultimate fighting force, but instead the alien turned the soldiers against one another. Meanwhile, an ambitious high school science teacher named Darren steals the only pure specimen. He's convinced he can discover the secrets of life by studying it, but before he does the alien gets loose, quickly infecting the tenants of his apartment building and creating an unstoppable horde of flesh eating super humans. Now, it's up to Darren and a small band of survivors to prevent the infected from reaching the city, and introducing the alien virus to the general population. Should they fail, it could mean the fall of mankind.

Nathan Bexton
as The Manager

Nothing original about this zombie/alien horror flick. Seen it all before.

There are no featured audience reviews yet. Click the link below to see what others say about Evilution!