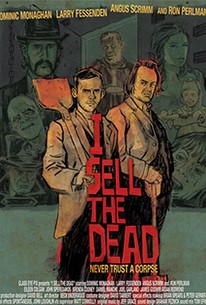 Critics Consensus: A horror comedy that's almost as chilling as it is funny, I Sell the Dead relies on its dark humor and offbeat charm to overcome its low budget shortcomings.

Critics Consensus: A horror comedy that's almost as chilling as it is funny, I Sell the Dead relies on its dark humor and offbeat charm to overcome its low budget shortcomings.

Critic Consensus: A horror comedy that's almost as chilling as it is funny, I Sell the Dead relies on its dark humor and offbeat charm to overcome its low budget shortcomings.

I Sell the Dead Photos

Adventure and horror merge in this morbid tale of two 18th century grave robbers who make it their mission to hunt down the undead abominations that refuse to accept their rightful place in the ground. Arrested by towering holy man Father Duffy (Ron Perlman) and threatened with the guillotine for robbing graves with his mentor, Willie Grimes (Larry Fessenden), apprentice ghoul Arthur Blake (Dominic Monaghan) agrees to make a full confession in exchange for a steady flow of whiskey. Arthur's story begins when he was just a young boy stealing jewelry from corpses in order to eat. Later, Arthur formed a partnership with Willie, and the pair went to work ensuring the walking dead learned to rest in peace. Now, with the specter of death looming ever closer, Arthur agrees to tell his tale to the very man charged with deciding his ultimate fate. ~ Jason Buchanan, Rovi

News & Interviews for I Sell the Dead

View All I Sell the Dead News

Critic Reviews for I Sell the Dead

If it's not actually a good movie, on some level you have to admire the chutzpah of a film set in 1850s Ireland but shot on Staten Island.

The worst fault visually, probably intended as a charm against the spell of low-budget-itis, is relentless darkness. Pervasive shadows in most shots do not evoke atmosphere, but eye strain.

There's very little effort to create something honestly creepy or all that funny. I Sell the Dead too often falls short in both categories with jokes that fall flat and scares that don't register.

Its wit and style, however, are thoroughly modern, as is a hilarious ending that leaves the sequel door wide open. And why not?

For fans of the gory, and those who like vampires in any context (absolutely any context), I Sell the Dead may be a bloody delight...For everyone else, it's just funny.

Sure McQuaid crushes some heads and slashes a few jugulars, but it's all so perfunctory the end result is actually kind of boring.

Director Glenn McQuaid performs about as well as a blind kid trying to navigate a balance beam in his gothic tale I Sell the Dead, fumbling elements both horrific and comedic and finally landing in a disheveled mess by the time this tale plays out.

At times predictable. At times overwrought. Most often a tad too silly.

This episodic horror-comedy...doesn't quite hold together for its entire length, but its amiable approach will win you over with its good intentions.

... this underworld buddy story has personality to spare. It's a zombie snack of a horror comedy: insubstantial but fun.

Capably delivers a half-dozen sub-genres in less than 88 minutes. That's just plain old fun, regardless of how much the flick cost to produce.

Audience Reviews for I Sell the Dead

I Sell The Dead is the story of two grave robbers who recall their days of grave robbing before being hanged. The film is slow, and seems to take forever to reach the end. But despite this, the film is quite enjoyable and fun to watch. The actors give fine performances and this is a fine debut for Glenn Mcquaid. If you love a low budget zombie flick, pick this impressive Horror Comedy up, despite its slow pacing it's a strong film with a few memorable and funny scenes. I sell The Dead is a terrific little film that will definitely appeal to zombie fans. It's a different take on your average zombie film, and it's very well done. The acting in I Sell The Dead is decent enough for this type of film and the film in parts is fairly creative, taking into account that Horror is pch stale. The film is of course in perfect, but it manages to be pretty good and entertaining. The cast features some impressive names, including Phantasm actor Angus Schrimm and Lord Of The Rings actor Dominic Monaghan. I Sell The Dead is a not a flawless film, but is a fair enough film to consider watchable. I enjoyed it and I thought that Glenn Mcquaid did a fine job directing this zombie comedy. This film is much better than most big buhorror films that make it into theatres and is very original, which is something that lacks in todays horror films. People are afraid of trying something inventive, and I Sell The Dead is most certainly that. A very good horror comedy that at times feels like it could be better, but in the end is pretty good considering it's a low budget picture.

Haha. Well. I really had no idea what to expect from this movie, but I was very entertained. It's quite well made. I really do tend to like that subtle British humor, and this movie was all that. A funny horror flick that didn't try to get too stupid and silly.

A fun flick, nicely put together.

I Sell the Dead Quotes