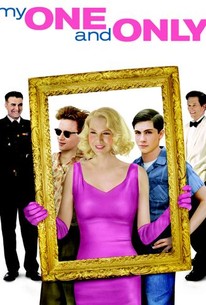 Critics Consensus: A breezy road movie with characters both glamorous and familiar, My One and Only is a colorful period look at the early life of actor George Hamilton.

Critics Consensus: A breezy road movie with characters both glamorous and familiar, My One and Only is a colorful period look at the early life of actor George Hamilton.

Critic Consensus: A breezy road movie with characters both glamorous and familiar, My One and Only is a colorful period look at the early life of actor George Hamilton.

My One and Only Photos

Inspired by the childhood experiences of actor George Hamilton, director Richard Loncraine's bittersweet period comedy tells the tale of one mother's attempt to find a new father for her two young boys after catching her husband with another woman. Beautiful but mercurial, Ann Devereaux (Renée Zellweger) has always gotten by on her own charms. Her husband, Dan (Kevin Bacon), is a successful bandleader, but when Ann becomes a witness to his infidelity, she packs their two sons, George (Logan Lerman) and Robbie (Mark Rendall), into her baby-blue Cadillac Coupe de Ville convertible and never looks back. The year is 1953, and Ann is convinced that her girlish charms are still as irresistible as ever. At first their trip is something of an adventure for everyone involved, but the harder Ann searches for a suitable mate the more she realizes that true gentlemen are a dying breed. As time wears on, flamboyant fledgling actor Robbie and cynical aspiring writer George begin to tire of changing schools, their increasingly humble lodgings, and their mother's romantic misadventures. It's a life of instability and unpredictability punctuated by moments of sheer panic, and as Ann forms a different future for her family than either of her sons could have ever imagined, observant George learns to look past her narcissistic exterior and appreciate the determination, dignity, and love that lies just beneath the surface. ~ Jason Buchanan, Rovi

John B. Crye
as Assistant Director

Vivienne Shub
as Woman With Dog

Geoff Rock
as Bellboy
View All

News & Interviews for My One and Only

View All My One and Only News

Critic Reviews for My One and Only

Part road trip, part coming-of-age story, the film ultimately reveals itself as a Hollywood memoir, but it saves any stardust for its last moments.

It has a smoothly intoxicating style and never overplays its hand. Better, it doesn't drip in maudlin melodrama, its emotional undercurrents happening with an almost effortless believability that's tastily refreshing.

A grand, colorful coming-of-age story with a candy box color palette and a standout performance by Renée Zellweger. It's a great story and a great crowd-pleaser.

It's refreshing, and let's hope it's [Zellweger's] passport out of rom-com purgatory and into mature roles. Sadly, it is a better career move than it is a movie.

A little gem of enjoyment at the end of the summer, My One And Only moves along in cruise control, at a steady even pace.

The next time someone bemoans 'They just don't make 'em like they used to,' buy them a ticket to My One and Only. Sometimes they do, and sometimes they make them better.

A road-movie with a flat tire, this is a dull journey that follows the teenage George Hamilton as he and his mother set off to find a new life along Route 66. It's a lifeless comedy, long on trivial adventure and short on drama and energy.

Funny, surprising, moving and uplifting, the film soars in a restrained, early 50s kind of way

A sharp and witty script provides the fuel for this captivating road trip in which the potential husbands of Renee Zellweger's Ann Deveraux are the pit stops.

Audience Reviews for My One and Only

Agreeable comedy follows a mother as she attempts to find a new father for her two young sons after catching her husband with another woman. Actor George Hamilton's real life reminiscences on The Merv Griffin Show form the basis of this road movie about his childhood. Renée Zellweger plays the self absorbed woman who unrealistically thinks she can simply get by on charm alone. She is the matriarch of this rather eccentric family of three and their slight adventures form the bulk of this occasionally entertaining film. Despite her capriciousness, she remains a likable character and the best reason to see the film. Period detail of the 1950s is painstakingly recreated.

Anne Deverauxer (Renee Zelweger) is a glamorous southern belle and mother of two teenage boys who walks in on her philandering husband Dan Devereaux, musician and band director (Kevin Bacon) in bed with another woman. Fed up, she packs her bags, cleans out the couple's safety deposit box and walks out taking the boys with her. One of her sons is the 15 year old Logan Lerman as George Devereaux aka George Hamilton, whom she instructs to buy a car. He is the narrator of the story. When he shows up at a Cadillac dealership with a wad of money to buy a car, the salesmen are flabbergasted, but it all makes sense when his mother shows up and purchases a 1953 blue Cadillac Eldorado convertible as they need a new car to leave town. She embarks on an adventurous road-trip hoping to find a man who would take care of them. The further away they go from NY, the more the mother learns about her family and herself. Her determination to search for a new life is inspiring as she is humiliated, arrested, and dumped a bunch of times but always manages to keep her chin up. In the end she learns the most valuable lesson, that the best person to take care of you is yourself. Logan Lerman's performance is the best reason to watch this film. He steals the movie. Logan happens to be a fast rising star in Hollywood with impressive performances in 3:10 to Yuma and Percy Jackson. He reminds me of a young Tobey Maguire. He should have gotten the Spider Man role in the Spider Man reboot. In this film, Logan really shines. The film is well cast, with an nice ensemble. Renee Zellweger is ok playing Logan's mother. The film kind of reminded me of a Neil Simon kind of film. The dialog is sharp and well written. The big problem with the movie is the pacing, which is completely off. Had they fixed the pacing up, then the film would have been much better. However, despite the pacing problem, the film is worth checking out, especially for Logan Lerman's performance.

I thought it was very cute and funny. The story was enjoyable, the acting was great. I enjoyed myself. I was expecting that Renee's character Ann would end up with her husband again even though I was really rooting for Nick Stahl's character Bud. I have to say I was actually surprised by the way it turned out. I don't think it was the most perfect movie. Sometimes it seemed a little cheesy, but overall it was good. And what a wonderful cast to boot. I would recommend giving this a try.

My One and Only Quotes