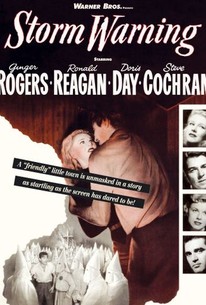 In Storm Warning, Ginger Rogers stars as a model visiting relatives in an unnamed small town. She happens to witness the beating death of a man at the hands of the KKK. Rogers soon discovers that the whole town is controlled by this vigilante group, and that her loutish brother-in-law Steve Cochran is one of the group's members. D.A. Ronald W. Reagan is the man who breaks the stranglehold of the hooded terrorists--through the simple expedient of walking into one of their meetings and calmly identifying each of them by name.

Robert B. Williams
as Jaeger

Tommy Walker
as Bob
View All

Good on spectacle but trivializes the serious subject of race hatred with an inadequate depiction of the KKK.

Extremely predictable and unfortunately it doesn't deal with racism but with the KKK's intimidation of outsiders to their town which leads to a death. The witness (Ginger Rogers) of the murder notices two men who take off their hood and is a little shaken up when meeting her younger sister (Doris Day) and is surprised when the killer (Steve Cochran) turns out to be her sister's new husband.

Boy are there things wrong with this movie, but as a time capsule its worth a view. Doris doesn't sing a note, actually its one of her strangest roles.

Ronald Reagan is the Man, He had all the dolls, In this movie he is with Doris Day and Ginger Rogers, now thats as good as it gets. It was neat to see some of Ron's movements and actions that folloed him thur life. In this movie he takes on the KKK. Its an excellent movie. The klan kills a white reporter for sticking his nose where it doesn't belong, and Ginger is a witness. Rent it or Buy its a Must.