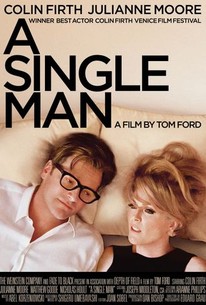 Critics Consensus: Though the costumes are beautiful and the art direction impeccable, what stands out most from this debut by fashion designer Tom Ford is the leading performance by Colin Firth.

Critics Consensus: Though the costumes are beautiful and the art direction impeccable, what stands out most from this debut by fashion designer Tom Ford is the leading performance by Colin Firth.

Critic Consensus: Though the costumes are beautiful and the art direction impeccable, what stands out most from this debut by fashion designer Tom Ford is the leading performance by Colin Firth.

In Los Angeles 1962, at the height of the Cuban missile crisis George Falconer, a 52 year old British college professor is struggling to find meaning to his life after the death of his long time partner, Jim. George dwells on the past and cannot see his future as we follow him through a single day, where a series of events and encounters, ultimately lead him to decide if there is a meaning to life after Jim. George is consoled by his closest friend Charley, a 48-year-old beauty who is wrestling with her own questions about the future.

Jenna Gavigan
as Other Secretary #1

Alicia Carr
as Other Secretary #2

Tricia Munford
as Cashier
View All

Critic Reviews for A Single Man

This is an impressive debut from which I am still reeling a little, and Firth's performance is astounding.

This is an important homosexual film based on a first-rate novel with a first-rate cast and probably a harbinger of similar movies to come. Many viewers will be disappointed that the movie only hints at intimacy rather than showcasing it.

A rare thing-a mainstream, melancholy love story, haunted by the past.

Settles for the glossy ephemera of a Vanity Fair cover spread.

All performances are actually very good, all the actors are beautiful. It's just a pity that the insistent beauty of the piece works against the emotion at the film's core.

The fact this was the debut of writer-director Tom Ford (yes, the designer) continues to boogle the mind.

A pitch-perfect study of bereavement, minimal yet expressive, full of subtlety and depth, Firth's performance deserves (but probably won't get) an Oscar.

Ford boldly re-invents the moment when the conformist, corseted 1950s turned into the dangerously free 60s. Colin Firth is at the top of his game...

A Single Man is a film nearly woozy with the fragile loveliness of life, but equally exacting in its rendition of physical beauty

A Single Man seamlessly blends present and past through imaginative close-ups, jump cuts and a milieu where closeted repression was the norm.

Audience Reviews for A Single Man

A deeply touching film with a beautiful cinematography and art direction, a wonderful score and a remarkable direction by fashion designer Tom Ford. Still, what stands out more than anything else is Colin Firth's fantastic leading performance.

Warning spoilers! Colin Firth gives a great performance. Set in the 1960s Colin is a college professor in LA. He gets devastating news about his partner of 16 years, who died in an accident and Colin isn't welcome to the funeral. He decides he is going to commit suicide. After interactions with different characters he decides not to do it but iconically suffers a heart attack.

One of the best of the year. Absolutely beautiful on every level. Stunning performances. I heart Tom Ford.

Based on a novel, this is the directorial debut of fashion designer Tom Ford. And, you know what, if he wanted to, the man could make a second career for himself in film because as far as debuts go, it's pretty good. The story concerns a British professor named Georgewho teaches English at a California university. It's November 1962, and the Cuban Missle Crisis has had people on edge for a month. For 8 months now, George has been mourning the loss of his long time partner Jim, whom he was with for 16 years. It hasn't been easy for George, but somehow, he has managed. Yet, that is not enough, and he's reached the point where he's decided that he'd be better off if he'd commit suicide and put an end to his suffering. The fim follows George over the course of what he is trying to make his final day. Most thigns happen as usual, but then there are of course the moments where he takes care of final bits of business and gets some loose ends tied up. Along the way, he has encounters with various people that have him thinking that mayeb he does still have a life that's worth livign after all. Interspersed throughout this narrative are various flashbacks from George's life together with Jim. Despite being a serious character driven drama filled with sadness and pain, there are also a number of moments of hope, humor, and love. Underscoring the film is also a great sense of beauty. Even the darker moments have a kind of sad beauty to them, making the film very moving and touching. This is a smart film filled with an excellent lead performance by Colin Firth, and some terrific supporting ones by Julianne moore, Nicholas Hoult, Matthew Goode, and Jon Kortajarena. The music is quite emotional and moving, and, as one moght expect (given Ford's background), this is a gorgeous looking film with some top notch art direction, set design, and costumes. As good as the film is though, it's not perfect. I can probably forgive him for this since it's debut and he's morwe used to fashion, but I think Ford overdirects this film at times. I don't think there needed to be as much slow-mo, or the filter shifts from color to b&w. I think he was maybe just nervous or directed the film self consciously, trying too hard to make a good first impresion. In all honesty, I think it would have been better had he just trusted his actors and let them do the heavy lifting until he strengthened his chops. Aside from that though, I don't have any real complaints. I think the film is well done, not boring, and mostly finds the right tone. It occasionally feels a bit heavy handed, but again, I think it's forgivable. It does handle the material in a sensible manner though, and I appreciate that. You should give this a watch, because it's pretty good.