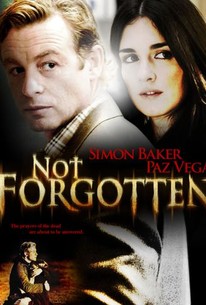 Jack Bishop (Simon Baker) draws on the powers of La Santa Muerte to find his missing daughter, Toby. His life was perfect until his dark past returned with a vengeance. Now the thing that Jack loves most has been taken away. With the help of a sheriff and two FBI agents, Jack searches the seedy underbelly of Mexico City for his daughter and discovers that there's no escape from the grip of La Santa Muerte. Paz Vega and Simon Baker star in a supernatural thriller directed by Basic co-producer Dror Soref.

Critic Reviews for Not Forgotten

Contains a plot full of twists that can be seen coming from some distance.

Not Forgotten is weighted down by obvious creative choices that mar what might have played out like a telenovela episode of Twin Peaks.

Casting its south-of-the-border setting as a dingy, nightmarish hellhole of hookers and red neon lights, Not Forgotten is a feature-length anti-tourism campaign for Mexico.

Not effective on any level.

From the start, it's clear there's a riddle to solve...I'm just not sure you'll care about the solution.

A stylish, yet dull thriller that doesn't have enough faith in its audience's intelligence. It's ultimately forgettable with waning suspense and intrigue.

It's a cliche-addled, nonsensical bit of piffle that would rightfully have vanished into the deepest recesses of the used-DVD dollar bin if not for the fortunate casting of television's Mentalist, Simon Baker.

Time for everyone to realize that when Simon Baker is the male lead in a horror movie, it will most likely be aggressively mediocre.

The opposite of a good thriller, it gets less interesting with each scene.

Not Forgotten overcooks just about every ingredient in its narrative chile con queso.

Audience Reviews for Not Forgotten

In "Not Forgotten," Amaya(Paz Vega) and Jack Bishop(Simon Baker), a banker, are parents of Toby(Chloe Moretz), from Jack's first marriage. As much as she dislikes playing soccer in the border town of Del Rio, Texas, she does so to please her father. One day during practice, Toby disappears and the only clue that Casper(Michael DeLorenzo), Amaya's cousin and acting sheriff, can find is a sneaker on the river bank. "Not Forgotten" is a dull movie that depicts the Texas side of the border as idyllic while Mexico is nightmarish, punctuated by nonsensical flashes. And it would probably be offensive if it was interesting in any way which is strange considering all of the occult and bare flesh on display. And then there is also numerology which is brought up when Yogi Berra is mentioned followed by a flash of the number 8 but then we already knew the Yankees are evil.