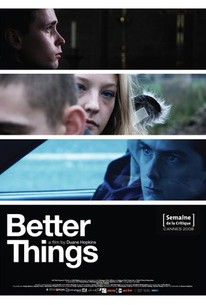 A handful of characters in a small British town deal with love, disappointment and temptation in this independent drama. Nan Wilson (Patricia Loveland) has come home after a long stay in the hospital, and finds herself sharing her house with her sister Gail (Rachel McIntyre). Gail doesn't comfortably connect with the outside world, and would prefer to stay in her room reading romance novels rather than reach out to others, but Nan struggles to find a common ground between them. Mr. and Mrs. Gladwin (Frank Bench and Betty Bench) have been married for six decades, but they've slowly began to drift apart, with time and misunderstanding creating a wall that separates them from one another. And after the woman he loved dies unexpectedly, Rob (Liam McIlfatrick) turns to narcotics to dull the pain, and has visions of living happily with her again. The first feature film from writer and director Duane Hopkins, Better Things was screened as part of the Critics' Week series at the 2008 Cannes Film Festival. ~ Mark Deming, Rovi

Mike Randle
as Joel
View All

An inventive, unclichéd example of British realism which shines a light into rarely explored social territory and the unexamined lives of its characters.

It's a miserable film, really, but it might just get you thinking - and make you grateful for what you've got.

The young director fails to inject us under the skin of his plotless drama of overdoses and funerals, but he clearly has talent to burn.

This is a dark and painful film, but one with a fervent belief in the possibility of love.

The film has a powerful, impressionistic style. Scenes are shot in suffocating, distorting close-up or at an equally stifling distance, revealing the sublime, indifferent landscape.

The film is an example of British realism with virtues. [Full Review in Spanish]

Duane Hopkins revealed a singularity and a talent that he later confirmed. [Full Review in Spanish]

It's quiet power and clear depiction of unhappiness makes Better Things a thoughtful film, although decidedly not a mainstream entertainment, that deserves close regard.

Although the film is flawed... it offers a powerful evocation of the desperate, tongue-tied helplessness that sets its various characters in motion, and which, in the film's riveting moments, echoes uneasily in the mind.

Hopkins marks himself out as a man of unique vision who isn't afraid to try something different to encourage an audience to think.

Slightly disappointing in that this could have been a really great film. Better Things is realistic and gritty, but has a very depressed tone to it, this suits it's subject matter, yet the uncertainty of story order sometimes confuses and whilst the characters are not all linked as such, there is a common link in the situations themselves. I just feel this film is missing a special ingredient that should have made it a really talked about, interesting, hard hitting film.