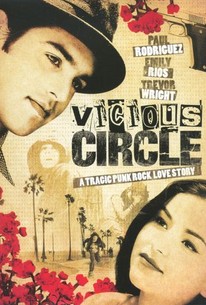 Two individualistic teenagers find one another but learn that romance can be an uphill struggle in this independent drama. RJ (Paul Rodriguez Jr.) is an aspiring artist living in Venice, California who frequently draws caricatures of the world around him when he isn't busy playing chess. One night, introspective RJ meets Angel (Emily Rios), a free-spirited Latina who sings in a rock band and lives a reckless lifestyle in defiance of her own epilepsy. It's love at first sight for RJ and Angel, but while the two young adults are clearly drawn to one another, their friends and family are not pleased with the match. Angel's disfigured brother Smiler (Robert Zepeda) is wildly overprotective of her, and doesn't think RJ is good enough for Angel, and Fin (Trevor Wright), RJ's half brother, dislikes Angel while harboring a deep resentment towards RJ's close relationship with their father (Richard Edson). Vicious Circle was the first feature film from writer and director Paul Boyd.

There are no critic reviews yet for Vicious Circle. Keep checking Rotten Tomatoes for updates!

What started out as an alright movie seemed to just fall apart.The best thing about this movie were the special effects & Paul Rodriguez playing a bum