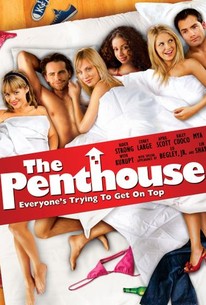 The winner of a reality television show invites his two best friends to share the Los Angeles penthouse he won for coming in first place, and quickly finds out why living with your pals isn't always the best idea. Realizing that a bachelor pad is no fun when you're flying solo, Tyler (Corey Lange) invites Kieran (Rider Strong) and another pal to come partake in the debauchery. A struggling writer who's reluctant to commit to his longtime girlfriend, Kieran quickly takes Tyler up on the offer, and before long life is one non-stop party. The strains in Tyler and Kieran's friendship start to show, however, when Tyler's flirtatious younger sister arrives for a visit, and puts the moves on Kieran. Featuring Ed Begley, Jr. and Lin Shaye. ~ Jason Buchanan, Rovi

Kurupt
as Host of 'Strangers'

Lochlyn Munro
as Barry
View All

Critic Reviews for The Penthouse

There are no critic reviews yet for The Penthouse. Keep checking Rotten Tomatoes for updates!

Audience Reviews for The Penthouse

When your cat falls asleep on your arm and you are powerless to reach for the remote across the table, sometimes you end up watching stuff like The Penthouse that you ordinarily would not. In this instance, it thankfully wound up as a positive experience. Party boy Tyler wins a spacious L.A. apartment as part of his reality show victory package and invites two friends to live with him, an equally partying pal who is starting work as a male nurse (although he tells everyone he is a doctor) and a low-key writer who prefers solitude while trying to break into fiction and away from his job as Muzak reviewer. Yes this scenario has been done a hundred times and you can probably fashion your own rough draft in the time it takes to read this review. And The Penthouse doesn't break any new ground either but at least has the good sense to keep its main characters likable. Rider Strong, better known as Ben Savage's best friend on TV's Boy Meets World, is Kieran the writer and gets reacquainted with Tyler's younger sister Erica when she visits before leaving for a year in Europe and who is distraught that her older brother still can't find time for her. Guess what happens? While the screenplay is light on plot surprises, it comes up with some thoughtful, honest discourse in the blossoming attraction between Kieran & Erica, played by newcomer April Scott who brings significant good-girl spark to the big screen. Even the party friends show a little growth, with the male nurse falling for his boss and Tyler finding his public image role as bad boy has a downside. Other good funny parts go to Randy the philosophical world-traveler ("You have the power to unfuck that which has been fucked.") and Ed Begley Jr. as condescending hardass father of Kieran's current bitchy girlfriend played by Kaley Cuoco from 8 Simple Rules and Big Bang Theory. On balance, The Penthouse is markedly better casual entertainment with some engaging characters than its low-rent neighbors.

Typical and kind of bland.