An Englishman in New York2009 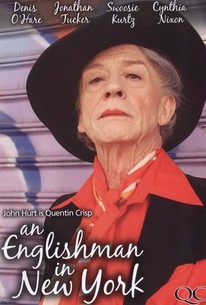 An Englishman in New York Photos

In 1975, John Hurt starred in a BBC television adaptation of Quentin Crisp's autobiography The Naked Civil Servant, playing the flamboyantly gay author and actor, and in 2009 Hurt revisits the role in this comedy-drama based on the latter years of Crisp's life. Crisp rose to fame in the UK following the publication of his memoirs and the success of a one-man show, but when a series of typically frank but witty quips during an interview lead to a public scandal, Crisp is approached by an American talent agent, Connie Clausen (Swoosie Kurtz), who says she can get him work in the United States. Crisp relocates to New York City, where he stages a show entitled "How To Be Happy" and gains a new audience. However, the high camp of Crisp's persona and his habit of making deliberately provocative statements (such as calling AIDS "a fad" and calling homosexuality "a terrible disease") earns him the enmity of some gay activists and causes the show to close prematurely. Clausen arranges for Crisp to meet Phillip Steele (Denis O'Hare), the publisher of the Village Voice, and Steele offers Crisp a job as the paper's new film critic. Crisp's witty and acerbic commentary on new movies wins him a new fan base and he and Steele become close friends, but as age and broken relationships begin to take their toll on Crisp, he returns to the stage in a new show created in collaboration with performance artist Penny Arcade (Cynthia Nixon). An Englishman In New York received its world premiere at the 2009 Berlin International Film Festival; the film takes its title from a song by Sting, who struck up a friendship with Crisp when they both appeared in the movie The Bride.

Silver Bramham
as Orlando
View All

Critic Reviews for An Englishman in New York

This fresh look at the gay culture and its desired goals establishes profound insight into what it means to be a true-to-spirit man these days, no matter if he happens to wear a little lipstick and maybe a scarf or two.

Hurt's perf gives some dramatic continuity to a production that is more a succession of setpieces than a through-drama per se -- at least until its affecting later stages.

It deserves to be seen for another of Hurt's exquisitely observed performances.

Hurt's performance as the flamboyant and lively Crisp is practically flawless.

Perhaps it was only a matter of time before Hurt returned to a role which, more than any other, crystallised his instinctive understanding for society's outsiders.

As a raconteur he had his moments but you could only listen to so many cod Confucian aphorisms about life, love and death ("Beauty is in the eye of the possessor"; "Every day you live is a kind of triumph" etc) without wanting to punch someone yourself.

Hurt is so comfortable as Crisp, that he exceeds even the real Quentin Crisp in charm and clueless vulnerability. Hurt adds irony to a scene about gay cloning, because in a sense, we prefer Hurt to the original.

Quality roles for John Hurt must be at a severe minimum if the greatly underutilized actor needs to revisit his 1975 triumph as gay icon Quentin Crisp.

Falls somewhere between unbearable and fascinating.

Audience Reviews for An Englishman in New York

What's so eerie (and you can see this is Resident Alien when they chat with each other) is that by this film, John Hurt has gotten better at playing Quentin Crisp that Quentin Crisp, as Crisp himself predicted at the very beginning of The Naked Civil Servant film. This entry does feel more like a made--for-tv-movie whereas I didn't know the first film was anything other than a typical low budget, British-shot, limited release film until they told me so in THIS flick! This one is less literary and more borrowed speeches and autobiographical tidbits, which is okay if you like simmering in exaggerated Crispness. Even though much trauma still happens, this is still the "warm and fuzzy" entry, whereas the first one was very cold and hard. And sadly did not qualify for the "Hot Gay Sex' list.

Not nearly as interesting as the Naked Civil Servant but John Hurt's performance is even better and it is a must see for him.

An Englishman in New York Quotes