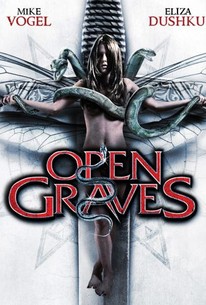 A malevolent board game proves to have deadly repercussions when a group of surfers role the die for fun, and begin to perish in the same way they were eliminated from the game. The name of the game is Mamba, and the board was constructed from the remains of a witch put to death during the Spanish Inquisition. If you lose this game, you don't have long to live; if you win, you get everything your heart desires. As the body count begins to multiply, the rest of the players race to cheat death by unearthing the secret of Mamba's supernatural curse. Eliza Dushku and Mike Vogel star.

As a game Open Graves is passable enough for one roll of the dice but definitely not a game with any replay value.

Jumanji meets Final Destination if both films were terrible.

Honestly this was one of the worst films I have ever seen. Predicatable, boring and frankly terrible the script was only made worse by the storyline. The acting was over the top and wooden at the same time, and at not one point in the entire movie did I genuinely want any of the cast to survive. This movie had the power to be really good, an X-Rated Jumanji if you will, but all it delivered was a grey shell of a film that will only be remembered because of its sheer lackluster morale rather than anything of merit. Terrible.

A very average straight to DVD film about a board game that brings death to the losers but a wish to the winner. Quite a low budget which is shown in the quality of the cgi, not great acting either but the story is ok. Could have been done so much better though.