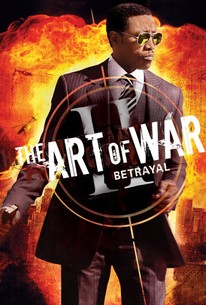 Emerging from hiding to avenge the murder of his former mentor, Agent Neil Shaw (Wesley Snipes) inadvertently stumbles onto a lethal trail of betrayal and corruption. Though Agent Shaw is determined to set the record straight while working under the auspices of his longtime friend and Senatorial candidate, he begins to surmise that he's being set-up after a number of dead bodies turn up and he's singled out as the killer. Now, in order to crack the assassination conspiracy that's been pinned on him by the powers that be, Agent Shaw will turn up the political heat while unleashing a lethal torrent of martial arts mayhem.

News & Interviews for The Art of War II: Betrayal

What The Hell Happened To Wesley Snipes?

View All The Art of War II: Betrayal News

Critic Reviews for The Art of War II: Betrayal

...primarily comes off as an in-name-only sequel to its 2000 predecessor...

Audience Reviews for The Art of War II: Betrayal

I don't know what all the fuss is about. It was an typical action movie - retired good-guy agent against the world. Sure it is similar to the Bourne movies, but it is not the only movie that is. If you like the one-man-against-the-world type of movies, watch this.

Terrible film, really boring, uninteresting and not needed in any way. I know Snipes is in the straight to DVD club right now but this doesn't even have any action! most Van Damme and Seagal straight to DVD's are miles better than this. Bad acting, lame 'action' scenes and a non existent plot make this an utter waste of time and film, I cant even imagine them making money from this.

Average action thriller sequel with Wesley Snipes in his return as Agent Niel Shaw who is being betrayed again. Snipes' action scenes in martial arts were okay, but the slow motion with the flashing between black & white and colour didn't seem excitement to me.

Craziest form of betrayal I have ever seen one person get caught up with on film within the last decade. See this to see how twisted it gets!