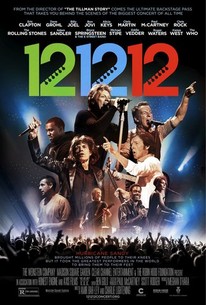 Critics Consensus: The Best Man Holiday is Warm and Well-Acted

An unusually compelling keepsake from what might well be the last time many of these '60s rockers perform together.

To try to present an epic concert like this is little more than an hour and a half - and to then devote even less than an hour of that to the music - seems like a very odd choice.

Adam Sandler's uproarious off-color parody of Leonard Cohen's "Hallelujah" injects the film with an inspired note of raucous comedy that undercuts any pretensions to solemnity.

Good-natured, upbeat, pretty predictable account of a concert cast with a lot of the usual suspects.

Busy, but not exactly invigorating.

Never goes beyond the level of a really good bonus feature on a special-edition concert CD.

For all the music and immediately surrounding sideshow, the film never loses sight of why this whole event was staged in the first place.

The collective picture that results is a city of eight million brought together as one.

Truly only a jerk would hurl negativity at a film whose entire box office is going to relief funds. But how about some mild skepticism?

Concert films may be all the rage, but it will be hard to top the glitz and missionary zeal of this look behind the scenes and in front of the crowd at the star-laden Madison Square Garden show to benefit the victims of Hurricane Sandy.