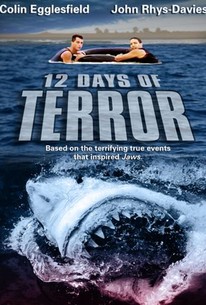 A vicious shark terrorizes the New Jersey shore in this tale of terror at the beach starring Colin Egglesfield and John Rhys-Davies and based on the actual events that inspired Peter Benchley's Jaws. The year was 1916 and the citizens of New Jersey dared not step in the water for fear of meeting a grim fate in the jaws of a great white shark. For 12 days, the bloodthirsty beast would stalk the normally serine shores of New Jersey awaiting the next victim to tempt fate by taking a swim, and as the most sustained series of shark attacks in recorded history shook an entire community, the power of the perfect predator proved that humankind isn't always at the top of the food chain.

Critic Reviews for 12 Days of Terror

There are no critic reviews yet for 12 Days of Terror. Keep checking Rotten Tomatoes for updates!

Audience Reviews for 12 Days of Terror

This is an excellent B shark movie, about 1916 shark attacks along New Jersey Coast. Only fault of the movie, it was filmed in South Africa, no where along Jersey Caost does it look like scenes in the film, but still an interesting story. 4 Stars