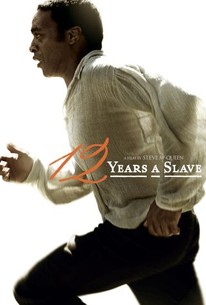 Critics Consensus: It's far from comfortable viewing, but 12 Years a Slave's unflinchingly brutal look at American slavery is also brilliant -- and quite possibly essential -- cinema.

Critics Consensus: It's far from comfortable viewing, but 12 Years a Slave's unflinchingly brutal look at American slavery is also brilliant -- and quite possibly essential -- cinema.

Critic Consensus: It's far from comfortable viewing, but 12 Years a Slave's unflinchingly brutal look at American slavery is also brilliant -- and quite possibly essential -- cinema.

Chiwetel Ejiofor stars as Solomon Northup, the New York State citizen who was kidnapped and made to work on a plantation in New Orleans in the 1800s. Steve McQueen (Hunger) directs from a script he co-wrote with John Ridley, based in part by Northup's memoir. Michael Fassbender, Brad Pitt, Benedict Cumberbatch, Sarah Paulson, and Paul Giamatti co-star. ~ Jeremy Wheeler, Rovi

Critic Reviews for 12 Years a Slave

Director McQueen, drawing on the visual aesthetic of his previous works Shame and Hunger, never shies away from frames that capture the ways that beauty exists in the most painful situations.

12 Years a Slave is, like The Trial, a trapdoor over the abyss. Although less abrupt than Kafka's novel, the movie wastes little time before plunging its viewer into a nightmare of dehumanization.

Ambitious, honest and horrifying all at once, 12 Years a Slave may not be the easiest film to watch more than once, but it will stay with you forever once you see it.

Add the visionary direction by Steve McQueen, the British Turner Prize-winning artist turned film-maker (Hunger, Shame) and you have an out-and-out stunner.

A significant, necessary piece of work, one that stays with you long after you rise out of your theater seat.

Movies can do a great many things - they can make us laugh, or incite our heroism, or frighten us, or make us cry. '12 Years a Slave' makes us feel, deeply and urgently.

Any understanding of slavery as a historical phenomenon is absent, despite the occasional reference to slaves as property.

A harrowing, stark movie that is equal parts educational and devastating.

Audience Reviews for 12 Years a Slave

It is not very clear what McQueen wants with this unflinching but detached story of survival, as he throws together scenes of brutal realism with theatrical dialogue, cartoonish villains and a plot that seems more interested in the torture than offering any new insight into the subject.

So far, the best of the Academy Award contenders I've seen. Next would be The Wolf of Wall Street. 12 Years a Slave is a must-see.

A worthy best picture winner based on the excellent performances and the importance of the subject matter, but this is not an easy movie to watch. If you can't handle graphic torture scenes, stay far away. There's quite of few of them and they are brutal. I admire that the actors and actresses were willing to put themselves through it. The movie itself is a great redemption story and emotionally compelling (especially the ending), but it can be slow at times. It's not something I would probably want to watch again, but absolutely worth it at least once if you can stomach it. The average film-goer that grabs this for a watch based on its awards will not like it more than likely because it is not a mainstream audience movie, but that is not something that should take away its accomplishments on and off the film.