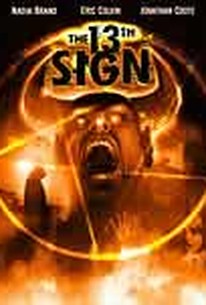 The bloody past of an outwardly serine village is jarred back into terrifying reality when the daughter of the man responsible for the death and destruction returns to face her worst fears in a gore-drenched trip into the land of nightmares that follows in the tradition of The Evil Dead. It was on the day of Lany's eighth birthday that her father took the lives of fifteen people before turning the gun on himself, and the horrified screams of her neighbors still haunt Lany as a young adult. The evil didn't die with Lany's father though, and as the haunted demon hunter returns to her childhood home to confront her dark past, she quickly finds that it's going to take much more than simple fire-power to make it through the night alive. ~ Jason Buchanan, Rovi

There are no critic reviews yet for The 13th Sign. Keep checking Rotten Tomatoes for updates!

There are no featured reviews for The 13th Sign at this time.