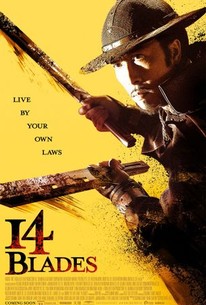 Trained in clandestine combat from childhood, the Jinyiwei were masters of the 14 Blades. Above the law and with a license to kill, they devoted their lives and lethal prowess to the service of the Emperor alone. When the Imperial Court is taken over by evil eunuch JIA, the best of the Jinyiwei, QINGLONG is assigned to steal a list identifying those still loyal to the Emperor. Unbeknownst to Qinglong, the Jinyiwei have fallen under the control of Jia, and during the mission he's betrayed and barely escapes with his life. Now the most wanted man in the land Qinglong must seek out and rally the loyalists to rise against Jia and restore the Emperor to power. In his way are the deadliest assassins in the land, his former brethren, the Jinyiwei. (C) Radius-TWC

Chun Wu
as Judge of the Desert

An Ruiyun
as Army Officer Yang

Now Streaming: The Purge: Anarchy, Sharknado 2, and More
Critics Consensus: Sin City: A Dame to Kill For is a So-So Sequel

Director, co-writer and production designer Daniel Lee keeps things moving so quickly, there's little time to worry about such basics as where we are or what's actually going on.

While "14 Blades" grinds on perhaps a half-hour too long, its ambitions and energies show that for a fresh take on the western, go east.

But not even the most garbled Tsui Hark joint is as unintelligible as 14 Blades, a film that's lost in its own backyard.

An immensely gifted physical performer, Donnie Yen isn't strong enough an actor to suggest an authentic inner life to his character beyond a vague sense of stone-faced dissatisfaction.

Stylish package has thesps hitting their marks (and each other), but also keeps the human drama from being swamped by wirework and CGI effects.

...all that said, it has its fun moments and Yen is just a total tough guy. Never has a small wooden box been filled with so many fun weapons of death.

Amassed with bountiful action sequences and handsome visuals, the expertly utilized special effects will be reason enough for genre fans to enjoy the film.

Casting Donnie Yen in a martial arts film and burying him in CGI is akin to casting Arnold Schwarzenegger in an action film and arming him with a Nerf gun.

Over the top, over saturated and overly melodramatic, this wuxia action adventure follows an outlawed swordsman in Ancient China who has to save the Emperor, fight off deadly assassins and restore his dignity.

a breathless dash through the desert, as spectacular as it is slyly sentimental.

Pretty cool martial arts movie. Well, i say pretty cool. They all seem the same to me but i suppose martial arts fans might say that about horror! When some old emporer gets overthrown by a massive wanker, one of his best people is sent out to find out who's still on the emporers side but due to a betrayal, our hero becomes the most wanted man about town. I'm not a big martial arts fan like i used to be years ago so can't judge to harshly but this seems like an average story surrounded by some brilliant fight scenes and its those scenes that make it pretty cool!

Truly breaktaking martial arts epic film, but it also mixed with a love story. It's about time Donnie Yen made an impact yet again in the fantasy wuxia-pian genre, given the rather recent dismal films with An Empress and the Warriors, and Tsui Hark's Seven Swords. He gives a brilliant performance as the ex-Jinyiwei guard. Writer-director Daniel Lee managed to create a film consisting of a successful amalgamation of wuxia-pian elements, with iconic fight action sequences set in tea houses, desert duels, forest brawls with abandoned temples and exotic cities enhanced by CG to play host to a film complete with double crosses, a prized possession that everyone is after, and had time to sneak in unrequited romance.

The story entails some attention, as it isn't exactly smooth sailing; nevertheless, it is far from troublesome to follow. At just over 1 hour and 50 minutes the early going paces by fairly quickly, as well as the ending. The middle is where it mildly slows down to focus on the characters.

The martial arts choreography is superb, with some tolerable effects to spice up the fights, as they move through ample amounts of settings. The camera work and editing is not the best out there; however it is more than satisfactory.

Donnie Yen shows that he is one of the greats at martial arts, which definitely outshines his acting. Zhao Wei is extremely adorable and Kate Tsui is pleasingly treacherous. Tsui has one of the more memorable characters of the film. Chun Wu is also notable.

14 Blades has a variety of things going for it, which in turn warrants a viewing.

It's about time Donnie Yen made an impact yet again in the fantasy wuxia-pian genre, given the rather recent dismal movies with Painted Skin, An Empress and the Warriors and Tsui Hark's Seven Swords back in 2005. Writer-director Daniel Lee managed to create a movie consisting of a successful amalgamation of wuxia-pian elements, with iconic fight action sequences set in tea houses, desert duels, forest brawls with abandoned temples and exotic cities enhanced by CG to play host to a movie complete with double crosses, a prized possession that everyone is after and had time to sneak in unrequited romance. The story though gave way at the midway mark, where it clearly became nothing more than a stringing together of battles and one on one duels, which thankfully were still exciting to sit through, with none of the fast cut edits or crazy closeups. With the introduction of Wu Chun as Judge, the leader of a brigade of bandits who has this cool boomerang double blade and Kate Tsui in a role where she only grunts, ample time got dedicated for one to mirror Qing Long's transformation and road to redemption, while the other, well, just serves to grunt a lot and armed with a serpent sword-like-whip, and powers of CG stealth. But underneath the fights, the flimsy storyline and gorgeous costumes, 14 Blades turns out to have an incredibly strong romance instead. The movie is far from being the perfect film, especially with unbelievably incoherent flashbacks and the going overboard with explosions, but Donnie Yen once again shows that when it comes to the fisticuffs, he still has a lot to offer, despite the story's potential that had it go off the blocks strongly, only to fizzle out before the end in a case of severe narrative burn-out.