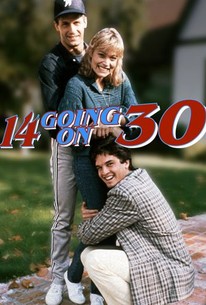 14 Going on 30 starts out like Candida and ends up like Back to the Future. 14-year-old Danny O'Neill (Gabey Olds), carrying a torch for his teacher, Peggy Noble (Daphne Ashbrook), can only suffer in silence as Peggy plans to marry brutish gym instructor "Jackjaw" Kelton (Rick Rossovich). With the help of his nerdy pal Lloyd's (Adam Carl) experimental growth accelerator, Danny becomes an overnight adult (now played by Steve Eckholdt). While in his 30-year-old state, Danny intends to expose Jackjaw as the jerk he is-only to end up in hot water himself. Loretta Swit, Patrick Duffy, Alan Thicke and Dick Van Patten guest-star in this made-for-TV movie, originally presented in two parts (March 6 and 13, 1988) on the Disney Sunday Movie anthology.

Irene Tedrow
as Aunt May

There are no critic reviews yet for 14 Going on 30. Keep checking Rotten Tomatoes for updates!

There are no featured reviews for 14 Going on 30 at this time.