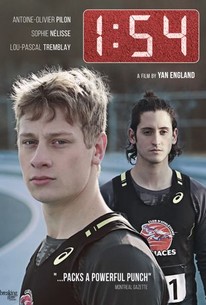 Tim, a shy sixteen-year-old athlete with a natural gift for running, is dealing with the loss of his mother, as well as his sexuality. However, the last four years of high school have been tough on him because of Jeff and his crew.In his last year of school, Tim is sick and tired of feeling like a loser, and wants to shine for once. He decides to stand up to Jeff by dethroning him in the 800m championship, the event Jeff is known for in school. But behind competition and rivalry, a secret is wreaking havoc. After a personal video is posted to social media, Tim's private life is about to explode into the public eye. Soon, Tim finds himself pushed to the edge where human limits reach the point of no return.

"1:54" intends to be a straight-shooting social drama about the multifaceted problem of bullying in the digital age, but it's out of touch with how real teenagers think and act and communicate. It's a modern film that feels like a relic.

A potentially meaningful movie that hands us a double dose of despair when a ray of hope was needed.

This timely Quebecois drama can sometimes creep too far into afterschool special territory, but the intense emotions on display give it a certain raw staying power.

Emotions are raw and vivid, and there are also moments of earthy humour and hopefulness to balance the story's bleak edges.

It's common for filmmakers to appear out of touch when making contemporary films dealing with bullying, often over-sensationalising and losing grip of reality. For Yan England's film to feel grounded is something of an achievement.

... 1:54 is so convinced of its own convictions that it fails to recognize that it's running towards the wrong goal.

It's all quite conventional but packs a powerful punch, in large part thanks to Pilon's nuanced performance.

There are no featured reviews for 1:54 at this time.