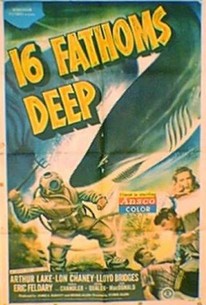 16 Fathoms Deep was a curious choice as the first effort from Arthur Lake Productions. Heretofore known best as Dagwood Bumstead in Columbia's Blondie series, Arthur Lake not only elected to produce this remake of the 1934 melodrama of the same name but also to play the film's comedy-relief character, a camera-crazy tourist named Pete. The story concerns a former Navy frogman who takes a job as a sponge fisherman in the Gulf of Mexico. The job proves more hazardous than expected, due to the dirty tactics perpetrated by a rival sponge dealer. Lloyd Bridges, still eight years away from TV's Sea Hunt, stars as the frogman-turned-fisherman, while Lon Chaney Jr., who played the hero in the 1934 version of 16 Fathoms Deep, is here cast as the villain. Filmed in Anscocolor, the 1948 16 Fathoms Deep paid its way, but wasn't successful enough to allow Arthur Lake to quit his day job as Dagwood.

There are no critic reviews yet for 16 Fathoms Deep. Keep checking Rotten Tomatoes for updates!

There are no featured reviews for 16 Fathoms Deep at this time.