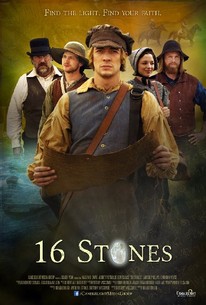 16 Stones tells the fictional story of one young man in the late 1830s who sees first-hand the destruction and loss the Latter-day Saints suffer after a mob attack in Far West, Missouri. Hoping to save others from future persecution, he and two friends set out to produce proof of the truthfulness of The Book of Mormon by finding an unimpeachable artifact - the 16 stones touched by the finger of the Lord as recounted in the Book of Ether. (C) Official Site

There are no critic reviews yet for 16 Stones. Keep checking Rotten Tomatoes for updates!

There are no featured audience reviews yet. Click the link below to see what others say about 16 Stones!