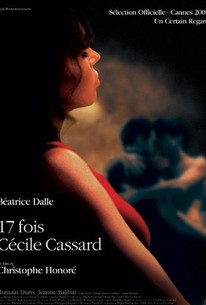 Directed by Christo Honore, 17 fois Cecile Cassard stars Beatrice Dalle as Cecile, who is having a terrible time getting over the accidental death of her husband, Thierry (Jerome Kircher). Hoping to find solace, Cecile drives to Toulouse and rents a room in a seamy hotel. Within days, Cecile has succeeded in attracting a bevy of gay men and sexually-charged young boys. Though they succeed in offering Cecile some much needed companionship, it isn't until she meets Matthieu (Romain Duris), who offers to father her child, that she believes herself to have found a second soulmate. ~ Tracie Cooper, Rovi

There are no critic reviews yet for 17 fois Cécile Cassard (Seventeen Times Cecile Cassard). Keep checking Rotten Tomatoes for updates!

There are no featured reviews for 17 fois Cécile Cassard (Seventeen Times Cecile Cassard) at this time.