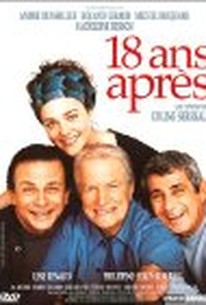 Coline Serreau's 18 Ans Apres (18 Years Later) is a sequel to her 1985 film Three Men and a Cradle, which was re-made in America as Three Men and a Baby. Marie (Madeleine Besson) is now on the verge of turning 18. She decides to spend a summer vacation with her mother Sylvia. Joining them are Sylvia's husband (Ken Samuels) and his two young adult boys (Gregoire Lavollay-Porter and James Thierree). Eventually her three "dads" (André Dussollier, Michel Boujenah, and Roland Giraud) and a housekeeper show up. The differences between Americans and the French, the foibles of single parenthood, and the pitfalls of middle-aged love and sex provide the material for the film's comedy. ~ Perry Seibert, Rovi

There are no critic reviews yet for 18 Years Later (18 ans apres). Keep checking Rotten Tomatoes for updates!

There are no featured reviews for 18 Years Later (18 ans apres) at this time.