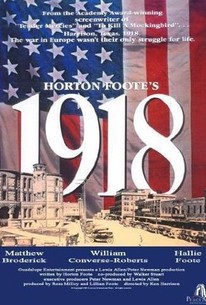 Adapted by Horton Foote from his own play, 1918 focuses on life in rural Texas during World War I. Foote's daughter Hallie plays the young wife of William Converse-Roberts. Though there's a baby on the way, the couple is treated like children by Hallie's wealthy parents, who exert a great deal of financial power over the young folks. Accused of being a "slacker", Converse-Roberts agrees to march off to war only after his father-in-law Michael Higgens agrees to look after his Hallie and her incoming baby. This news thrills Converse-Roberts' younger brother Matthew Broderick, who has been told that he can join the army only after his brother does. The 1918 influenza epidemic claims the newborn baby's life, but once this tragedy has been absorbed, life goes on as before, with everyone holding out hope for the future. 1918 was later telecast as part of a Horton Foote trilogy on PBS' American Playhouse.

Erin McLemore
as Jenny
View All

This well-crafted and intimate film refuses to over inflate its subject matter, but rather conveys its messages through credible and sympathetic characters.

There are no featured reviews for 1918 at this time.