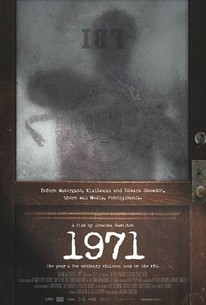 Critics Consensus: Illuminating a chapter of America's past that ties directly into current events, 1971 persuasively demonstrates that those who do not learn from history are doomed to repeat it.

Critics Consensus: Illuminating a chapter of America's past that ties directly into current events, 1971 persuasively demonstrates that those who do not learn from history are doomed to repeat it.

Critic Consensus: Illuminating a chapter of America's past that ties directly into current events, 1971 persuasively demonstrates that those who do not learn from history are doomed to repeat it.

The FBI was unaccountable and untouchable until 1971, when a group of ordinary citizens uncovered its illegal domestic spying programs. On March 8, 1971, The Citizens' Commission to Investigate the FBI, as they called themselves, broke into a small FBI office in Media, Pennsylvania, took every file, and shared them with the American public. These actions exposed COINTELPRO, the FBI's illegal surveillance program that involved the intimidation of law-abiding Americans and helped lead to the country's first Congressional investigation of U.S. intelligence agencies. Never caught, forty-three years later, these everyday Americans - parents, teachers and citizens - publicly reveal themselves for the first time and share their story in the documentary "1971." Given the recent disclosures of NSA spying, this story could not be more relevant. (C) Official Site

Lauren A. Kennedy
as Bonnie

New on Netflix: Season Two of How to Get Away With Murder and More

In her recounting, a strange and lively atmosphere of outrage, enthusiasm and paranoia, Hamilton has made of her tale a kind of real-life, old-fashioned analog caper film.

1971 is a fascinating documentary that unearths the human story behind a burglary of the FBI offices in Media, Pennsylvania, when every secret file was stolen.

Well worth seeking out, especially for anyone with an interest in activism and counterculture history.

"1971" is an appropriately matter-of-fact title for a decidedly low-key documentary. But don't mistake a lack of flash for an absence of substance.

For those who care about personal freedoms, this well-crafted and illuminating film is required viewing.

The film is entertaining; there are many small moments of humor to be found in the tense situations, and audiences are satisfied to see the FBI's activities exposed for what they were.

Well-told and engaging, 1971 effectively build a portrait of the times and what follows without leaning too heavily on the recreations.

Even if you have an allergic reaction to dramatic re-enactments in documentary films -- and I confess I get itchy during them -- 1971 provides an exciting, non-hokey account of a remarkable true story.

This is fun, but the movie is perhaps most interesting for the way it examines the group's collective on-the-lam cool.

An excellent doc about the great whistle blowing of the 70s - uncovering the mass surveillance undertaken by the FBI on ordinary American citizens.

"1971" is a documentary about a group of anti-Vietnam war activists taking their pacifism a step further. Responding to rumors that the FBI was spying on them, they planned and successfully pulled off a burglary of an FBI regional office in Media, Pa in 1971. What they found confirmed not only their fears but also that it was even worse than they previously imagined, especially as it relates to the formerly top secret program COINTELPRO. In dispensing the files to media outlets, this also served as a precedent for future whistleblowers such as in the cases of the Pentagon Papers and Watergate. And that relevance continues to the present day. "1971" also serves as a neat visual companion to Betty Medsger's book "The Burglary" by using archival footage to visualize the times, while making suspenseful use of reconstructions.(As one of the journalists who received the files at the Washington Post, she is also interviewed in the documentary, along with the burglars.) At the same time, the book goes into greater detail, especially on the subject of how exactly J. Edgar Hoover's unchallenged cult of personality hurt the FBI over the decades.