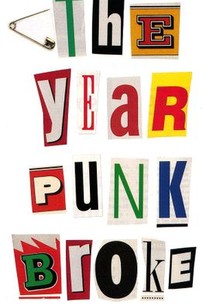 In 1991, pioneering noise rockers Sonic Youth were about as big as a punk rock band was supposed to get; they'd become one of the most acclaimed bands on the American rock underground, they were signed to a prestigious major label, Geffen, and seemed poised to edge into the commercial mainstream. As it happened, punk rock was about to invade radio and MTV in a big way, but Sonic Youth weren't the ones to lead the charge. In the summer of 1991, Sonic Youth spent two weeks playing large clubs and music festivals, with an up-and-coming band called Nirvana on hand as their opening act. Both bands found themselves playing to some of the biggest and most enthusiastic audiences they'd experienced thus far, and it was a preview of what Nirvana was to experience when their album Nevermind was released a few months later. Musician and filmmaker Dave Markey tagged along to chronicle the tour with a Super 8 sound movie camera, and 1991: The Year Punk Broke was assembled from the footage he shot that summer, as a handful of alternative bands were enjoying a working holiday in Europe, unaware that they'd all be a lot closer to the spotlight in six months. Along with performances from Sonic Youth and Nirvana, 1991: The Year Punk Broke includes appearances by Dinosaur Jr., Babes in Toyland, Gumball and The Ramones.

Critic Reviews for 1991: The Year that Punk Broke

There are no critic reviews yet for 1991: The Year that Punk Broke. Keep checking Rotten Tomatoes for updates!

Audience Reviews for 1991: The Year that Punk Broke

Sonic Youth in all of their glory. Live Nirvana concert footage! Copies of this on DVD: Extremely Rare!

1991: The Year that Punk Broke Quotes