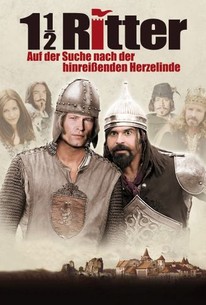 With an approach that recalls such outings as Monty Python and the Holy Grail (1974) and Robin Hood: Men in Tights (1993), Til Schweiger's zany farce 1 1/2 Knights - In Search of the Ravishing Princess Herzelinde concerns two knights who set out on a heroic mission, to rescue the kidnapped Princess Herzelinde. Given their propensity for klutziness, however, the expedition soon turns into a gag-filled comedy of errors.

Til Schweiger
as Ritter Lanze

There are no featured reviews for 1 1/2 Ritter - Auf der Suche nach der hinreißenden Herzelinde at this time.