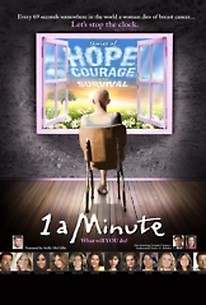 1 a Minute, from Uniglobe Entertainment and Namrata Singh Gujral, collects stories from international celebrities such as Priya Dutt, Olivia Newton-John, and Bárbara Mori. Detailing their experiences with cancer or family members who have dealt with it, this film also calls on doctors such as Dennis Slamon and Deepak Chopra to educate and raise awareness on the disease. Narrated by Kelly McGillis, the documentary will teach viewers more about the female perspective on cancer and suggested methods of prevention and treatment.

Critic Reviews for 1 a Minute

There are no critic reviews yet for 1 a Minute. Keep checking Rotten Tomatoes for updates!

There are no featured reviews for 1 a Minute at this time.