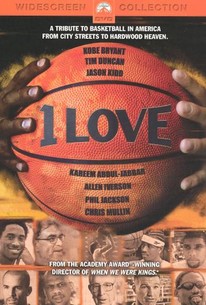 Essentially a cinematic love letter to the game of basketball, this documentary was helmed by filmmaker Leon Gast, the Academy Award-winning director of When We Were Kings. Featuring such basketball luminaries as Kareem Abdul-Jabbar and Kobe Bryant, the film explores the game's modern roots on the blacktop courts of urban America and charts its rise to one of the most popular sports in the world. 1 Love screened at Norway's 2003 Filmquart Film Festival.

Because it aims to tell the entire story of basketball in just 90 minutes, 1 Love glosses over most of its material, leaving us wanting more.

There are no featured audience reviews yet. Click the link below to see what others say about 1 Love!