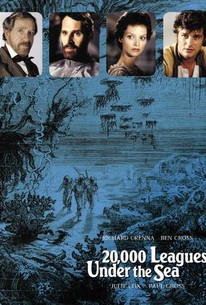 Michael Anderson directed this TV movie version of Jules Verne's oft-adapted science fiction classic 20,000 Leagues Under the Sea. Richard Crenna stars as Henry Aronnax, a marine biologist, who, along with his crew, must confront the maniacal genius Captain Nemo (Ben Cross), helmsman of the Nautilus. Paul Gross and Julie Cox also star. This film should not be confused with the other 20,000 Leagues Under the Sea TV movie that aired the same year and starred Michael Caine and Patrick Dempsey.

Nicholas Hammond
as Saxon
View All

There are no critic reviews yet for 20,000 Leagues Under the Sea. Keep checking Rotten Tomatoes for updates!

Blah with a dull lead actress.

This movie is not a remake, but an altogether new adaptation by one Joe Wiesenfeld, who has clearly studied the novel carefully and crafted a script that is faithful to Jules Verne's original intent and exposition while cutting to the chase. The emphasis falls in different places than in the Disney movie and at a faster pace, but it maintains a sense of wonder and adventure. Joe Wiesenfeld is attentive to character and motivation and crafts a script that makes good dramatic sense. The biggest change is necessary in modern times and most welcome, especially because she is played by the lovely and talented Julie Cox. Other women are glimpsed among the crew of the Nautilus, bringing the movie up-to-date in period dress. The classically trained English actor Ben Cross was an excellent choice for Captain Nemo. He is absolutely believable as the tragic and haunted captain who recognizes no boundaries in the sea or his own conduct. All the contradictions and conflicts of the character are conveyed with subtlety by Ben Cross. Richard Crenna brings gravitas and presence to the role of Professor Aronnax. The production design and costuming redefine the utilitarian world of the Nautilus as a ship we can believe in. The cinematography is by the great Alan Hume and the direction by Hollywood veteran Michael Anderson is both pictorial and dramatically engaging. This is a well-produced and legitimate version of Jules Verne's novel.