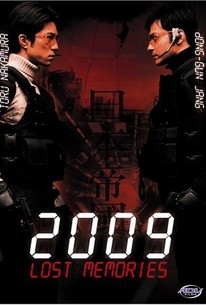 This action thriller with a sci-fi twist takes place in an alternate dimension in which Korea has been subjected to Japanese rule for more than 100 years. Why? Seems that in 1909, a Korean nationalist assassinated a Japanese statesman, which set events in motion that changed history (in this world, Japan won World War II). It's now 2009, and the Korean independence movement is heating up again ... but will this time be any different?

There's a shallowness to the central relationship -- compounded by Chang and Nakamura's lack of chemistry -- which undermines the whole film.

A beautifully designed and ambitious example of Korean cinema.

The amped-up Dickian scenario features too many frame-filling fireballs.

The movie gets cold feet. It chickens out and doesn't play fair.

Though it ultimately devolves into megabudget Hollywood action-movie cliches by way of John Woo, Lee's handsome blockbuster is an entertaining variation on the American formulas that have colonized world cinema.

2009: Lost Memories was a very ambitious project for Korean cinema. It tries to emulate big name blockbusters, with varying degrees of success. The story itself is very interesting, being set in an alternate Korea, which is now part of Japan. The film certainly piles on a lot of entertaining action but the real problem here is the grimy cinematography, it makes it look cheaper than it really is. The action scenes were also not shot at a higher FPS, resulting in the slow-motion footage becoming jumpy and jarring. This is a huge mistake for an action film and blemished each scene it was used in. For a 135 minute running time, the film does manage to hold the attention.

A movie that has potential, but never really takes full advantage of it. I have seen a number of different plots for this film and they are, for the most part, true. So, if the plot sounds interesting enough then you should watch this.

The very beginning of this film should catch your attention because you are given a time line from the early 1900s until the present day, which ends up being 2009 in this film. Well a time line doesn't sound all that great, but when it is distorted it is interesting. The Japanese are allies with the US during WWII and the atom bomb is dropped on Berlin instead. It is just too bad this film isn't about Berlin. It is about the Japanese "conquering" the Koreans.

The first 90 minutes of this film is nothing more than your typical crime drama with a good amount of action thrown in. In other words, it doesn't really utilize this distorted time line all that much. The film is pretty slow and when there is action it isn't that great. It's not that the choreography of the shootings are bad, it is the camera effects (cinematic elements) and the music that is playing during them. It makes all these action sequences overly dramatic, when they really aren't. The only time when this works is in the final sequence.

Once you get thru the first 90 minutes you will be rewarded. The film makes a sharp turn and the distorted time line comes into play big time. The final 45 minutes really save this film from being a mediocre crime drama. The science fiction aspect kicks in and it leads to a pretty good ending.

The acting isn't too bad. The only real standout is Dong-Kun Jang, of Tae Guk Gi fame. He does a nice job with both the Japanese and Korean aspects of his character.

This film could have improved in many places, but if you like crime dramas with some science fiction, then this film should entertain you. Especially the ending.