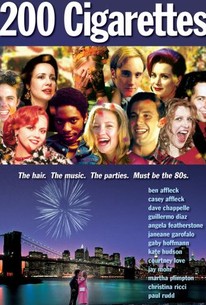 Critics Consensus: A clumsy and scattered comedy with a poorly executed script.

Critics Consensus: A clumsy and scattered comedy with a poorly executed script.

Critic Consensus: A clumsy and scattered comedy with a poorly executed script.

A comedy set in New York's East Village on New Year's Eve 1981, "200 Cigarettes" follows various young couples and friends whose lives will intersect at a party that night in a downtown loft. Anyone who has been on the town the last night of the year knows the familiar feelings: sentimental recollections, uncertainty about the future and fear that time is running out are mingled with the excitement of a cold winter night and the anticipation of a new love when the clock strikes 12. In "200 Cigarettes," the evening's magic pushes each character to share a secret or create a pact, rush toward calamity or run from danger, break up or hook up. But by evening's end, the characters will have one thing in common: all will be revealed in the clear light of the morning after.

The female creative team of [Director Risa Bramon] Garcia and writer Shanna Larson drove a set of storylines that centered women's frank sexuality in a way that still isn't as mainstream as it should be.

There's no sign of the writerly derring-do that is really essential to daisy-chain storytelling.

A light comedy, pure and simple (and hardly unfamiliar), but its makers sustain its energy through the unraveling of an intricate plot and bring to it a certain edge through a witty, sharp sense of observation.

A twentysomething comedy with a brain-dead script, unflattering lighting and 16 performers in search of a scriptwriter.

We frequently look past a subpar movie's terrible script or acting as long as it contains good special effects or cinematography, but we rarely extend the same courtesy to good costuming. How boring.

New Years Eve, 1981. Disco was on its way out, and the "New Wave" was pounding on the shore, bringing in a fresh tide of angst for a new decade . . . good for a laugh

In the hands of director Risa Bramon Garcia and writer Shana Larsen, their predicament is funny, sad and wistful as only young lust can be.

A stupid and misguided comedy that has many funny moments but whose characters are empty and only follow the needs of a lame script - which also has no organic reason to be set in 1981 other than to be packed with 200 songs from back then.

This is my New Years movie! Like folks watch A Christmas Story or The Grinch for Christmas.... this is New Years for me!

Misadventures of an interesting set of characters in New York on New Year's Eve. Great 80's atmosphere and music. Fun stuff. I enjoyed it.