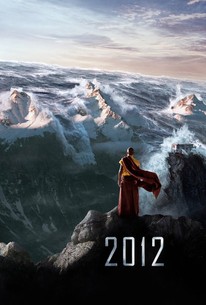 Disaster movie maven Roland Emmerich (Independence Day, The Day After Tomorrow) crafts this apocalyptic sci-fi thriller following the prophecy stated by the ancient Mayan calendar, which says that the world will come to an end on December 21, 2012. When a global cataclysm thrusts the world into chaos, divorced writer and father Jackson Curtis (John Cusack) joins the race to ensure that humankind is not completely wiped out. Chiwetel Ejiofor, Danny Glover, Amanda Peet, Thandie Newton, and Oliver Platt round out the cast of this end-of-the-world thriller co-scripted by the director and his 10,000 B.C. writer/composer, Harald Kloser.

Daren A. Herbert
as Ship Waiter

Shaun Wilson
as US Army Worker

Leigh Burrows
as US Army Worker

Cusack, with his one-of-the-guys face and his nice way with child actors, does creditable work as an Average American Dad trying to put things right.

2012 is the rare case of a bad film that I'm nevertheless obliged to recommend you see.

2012 is reminiscent of yesteryear '80s shlock-tastic blockbusters -- total popcorn entertainment with ridiculous dialogue and impossible situations and special effects that will boggle the brain for a good two-plus hours.

Even though this movie's running time of two and a half hours is about one hour too long, there's still some pretty cool disaster stuff on the way.

2012 is so long, and its special effects are at once so outrageous and so thunderously predictable, that by the time I lurched from the theatre I felt that three years had actually passed and that the apocalypse was due any second.

[Nothing] will give you more respect for how difficult it is to be an actor than watching top talent like John Cusack, Chiwetel Ejiofor, Amanda Peet and Oliver Platt struggling to treat the film's ungodly language and situations with perfect seriousness.

A good disaster thriller must contain both thrills and massive destruction--2012 has both in great quantity.

Harrelson has one of the better characters in the film and Peet does a good job.

Roland Emmerich has pretty much cornered the market on big budget disaster films.

"2012" crammed all of the awesome bits from every disaster movie into a single, incredible cinematic achievement. Do yourself a favor, watch "2012" and feel the circuitry of your brain melt into a steaming ball of flaming wreckage.

I got bored incredibly fast. It has fascinating visual effects. And that is where it stops. There are serious issues of race and class struggle that start to peak up towards the end of the movie, but instead of making the movie interesting by exploring these avenues more, Emmerich returns the focus to the most obnoxious of lead characters.

I suppose the general idea behind the film was noble, but why did they have to write such a crappy story for it. It's a given to say that the visual effects are excellent. But a decent plot, if such a think ever existed in disaster flicks, would've been a nice touch.

Visually breathtaking in every shape and form, indeed, but the film's lack of impact and delivery combined with the lengthy duration doesn't capture the audience attention and fear of extinction. Roland Emmerich's 2012 provided a laughable plot and less-than-dramatic storyline to make the entire motion picture to be more disastrous than what the Mayans had predicted. 3.5/5

I loved every second of this over the top completely ridiculous movie. But than again I like end of the world flicks. A movie with a group of good actors and I just enjoyed it. In the end if I am entertained a good review it will get.