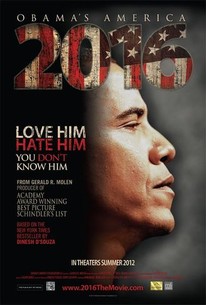 2016 Obama's America takes audiences on a gripping visual journey into the heart of the world's most powerful office to reveal the struggle of whether one man's past will redefine America over the next four years. The film examines the question, "If Obama wins a second term, where will we be in 2016?" Across the globe and in America, people in 2008 hungered for a leader who would unite and lift us from economic turmoil and war. True to America's ideals, they invested their hope in a new kind of president, Barack Obama. What they didn't know is that Obama is a man with a past, and in powerful ways that past defines him--who he is, how he thinks, and where he intends to take America and the world. Love him or hate him, you don't know him. -- (C) Official Site

D'Souza is loath to give offense to what he seemingly regards as America's dominant culture. Indeed, one might just as easily interpret the entirety of 2016 as evidence of D'Souza over-compensation with regards to his feeling of post-colonial...

The film is a sleepy dud, a polemic that, like D'Souza himself, is at once both outrageous and deeply boring.

The movie seems destined to irritate the president's supporters while mobilizing his detractors, even as it is doomed to win precious few converts. It's a textbook example of preaching to the choir.

No one doubts that the country faces major challenges in the next four years, but there is one safe bet: The future is unlikely to be affected by this simplistic documentary.

Viewers may do some headscratching. This can be a very strange movie.

Every anti-Obama argument D'Souza makes from the right could be made, more forcefully, from the left.

Segments dealing with the college-age Obama's political activities and his later involvement with domestic terrorists like Bill Ayers are... valid and illuminating territory for viewers who haven't heard these things before.

D'Souza never actually shows...Obama's own words or deeds. Instead, he engages in guilt by association.

So Obama is bringing socialism to America by 2016? That would explain why Bain Capital is making bigger donations to him than to its founder Mitt Romney.

As questionable as right wing D'Souza's lack of unbiased assertions, is the seeming lack of anyone out there who can rise above being either a red state or blue state movie critic, when it comes to political documentaries in such a divided nation.

Poorly filmed and quite dull despite its efforts to intrigue, Obama's America is a paranoid, useless film that really makes no valid statement whatsoever.

An interesting, though extremely slowly paced and occasionally poorly narrated look at the rise of President Barack Obama, and how his connections and past shape the future for the country he oversees. While it delivers in its final half hour, the first hour borders on tedium, specifically though director Dinesh D'Souza's choice of narrating and interviewing (on the phone, which seems totally fake). With that said, it has some content that is definitely arresting, and should not be brushed off. It is undeniable that a large part of our country is infatuated with Barack Obama, potentially for all the wrong reasons, while turning a blind eye to the more disturbing background he possesses. Whatever your politics are (I am a Republican, but I was still let down a little by this documentary), definitely watch atleast the last half hour or so to get a summary as to what we could be looking at four years down the road. Some claim D'Souza is stretching and what he is saying is outlandish, but based on the evidence and connections he focuses on, it's really not that crazy of a scenario. As a recently graduated college student, I know the troubles my generation is having finding steady employment, me included. The ties this President has, as well as the irrefutable underpinnings he has to socialistic policies definitely concerns me, and I hope more documentaries come out in the mean time that further explore Obama and his motives, as the mainstream media's love for him has grown to an unbearable amount.

First thing first, I consider myself an Independent, but I have always voted Democrat. I'm always intrigued by political documentaries, and when I heard all the press about this one, I figured I would give it a shot. Long story short, this isn't so much as a documentary, as it is one man interpreting Obama's book, "Dreams from my Father". It's told through narrative, with some interviews and reenactments. When you watch a movie like this, you have to watch it objectively, because this isn't 100% fact, it's just what someone thinks and they made a movie about it. It's like my movie reviews, it's how I see a movie, and it could be very different than how you see it. While I don't agree with a lot of the movie, I found it to be informational and entertaining. Some of the stuff I had never heard of, or thought of it in the way it was presented. Will it change the way I vote in November? No, but it makes the election a little more interesting. The reenactments are kind of cheesy, as is the background music. The filmmaker/narrator, Dinesh D'Souza is sometimes entertaining, and at other times boring. It's kind of like he is reading an essay in parts. Still, it's worth a watch,probably wouldn't spend any money on it which I didn't, no matter your political views.