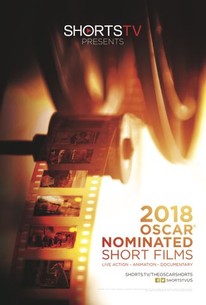 For over a decade, ShortsHD has proudly brought the Oscar Nominated Short Films to audiences across the globe.This exclusive release features the year's most spectacular short films across Live Action, Animation and Documentary, and for a limited time is available to watch on the big screen.The 2018 Oscar Nominated Short Films will be released in theaters on February 9th, giving you the opportunity to see the nominated short films before the Oscar Awards ceremony on March 4th.

Makes for an all-around delightful package of cartoon inspiration when viewed on the big screen.

As always, there is an eclectic mix.

As a group, these short films sing.

The Oscar-nominated shorts may have smaller running times, but the themes tackled are often big.

The animated shorts theatrical program, especially, gives you a solid bang for your buck ...

While the entries are strong, they're far from definitive.

Despite the theme of loss, viewers can take heart in knowing that their time and money will not be lost if they catch one of the many theatrical screenings; this is the first crop of nominees in many years without a single dud.

A delightful group of animated shorts with even the weakest being better than most films at the local cineplex.

My pick: I suspect that this year's winner will be 'Garden Party,' a spectacular debut from new French animation studio Illogic that I am sure we will be seeing a lot more stunning work from.

Finally, Negative Space.... is a joyful, inventive celebration about a son recalling how his father taught him the old school art of suitcase packing, the last of several standouts in this year's slate.

My out-and-out favorite of the bunch -- and among my faves of the year -- is Garden Party, the seven-minute French animated black comedy.

There are no featured audience reviews yet. Click the link below to see what others say about 2018 Oscar Nominated Shorts - Animation!