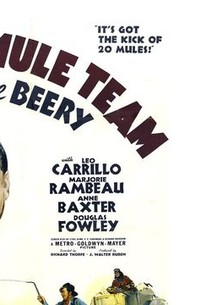 As indicated by the title, 20 Mule Team is all about pioneering borax miners in territorial Arizona. Wallace Beery goes through his usual paces as Skinner Bill Bragg, a fugitive from justice who forms an uneasy alliance with slick outlaw Stag Roper (Douglas Fowley). The two scoundrels plot to jump a valuable borax claim in Death Valley, but Bragg changes his minds when Roper begins to have unsavory designs on virginal heroine Jean Johnson (Anne Baxter, in her film debut). Ever on the prowl for a new Wallace Beery-Marie Dressler screen team, MGM pairs up Beery with Marjorie Rambeau this time out, with mixed results. 20 Mule Team was originally released in Sepiatone, a tinting process MGM had previously utilized in the "Kansas" scenes of The Wizard of Oz. ~ Hal Erickson, Rovi

The spectacle of Berry parked waist deep in a desert water hole, fully-clad and 'taking a bath' can break down the resistance of many a critical funny-bone.

There are no featured reviews for 20 Mule Team at this time.