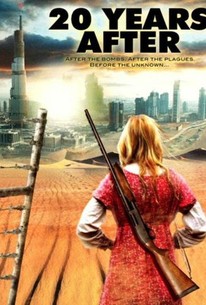 A woman (Azura Skye) becomes pregnant with the first child of the post-nuclear apocalypse era in director Jim Torres' feature adaptation of a 1987 play by Ron Harris. Desperate to provide a better life for her unborn child, the expectant mother joins a band of survivors two decades after the unthinkable became a devastating reality. Joshua Leonard (The Blair Witch Project), Nathan Baesel (Invasion), Reg E. Cathey (The Wire), and Diane Salinger (Carnivale) co-star.

Skylar Howie
as Liam
View All

Critic Reviews for 20 Years After

Re-birth of a nation

Audience Reviews for 20 Years After

An interesting movie that details an apocalyptic world where trust is quite non-existent. Azura Skye, Joshua Leonard stars . Worth seeing.