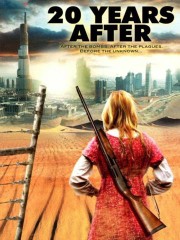 Dave J
July 15, 2016
Some kind of explosion turning the world into a wasteland or dystopian giving factions amnesia regarding their identities or who they are.

James L
July 9, 2014
There are better films in this genre

dan c
February 3, 2013
If you think a post apocalyptic film has to have everybody carrying a machine gun and wearing punk rock fashions, skip this film.
If you need one dimensional antagonists, skip this film.
If the main characters must have sex to complete the plot, skip this film.
On the other hand if you want a more real world take on fairly mundane characters acting as normal as possible in abnormal situations, if you want a film that will leave you thinking for days after, don't miss this gem. 20 years after is a clever, thoughtful, movie that won't be confined to a simple formula. Great soundtrack too. I think the folks slamming this film were really hoping for yet another Mad Max movie or maybe a post apocalyptic Die Hard.

For a post-apocalyptic flick, not much goes on.

Ani C
½ August 24, 2012
Good post apocalyptic movie that depicts a bleak landscape cause by a man-made catastrophe. It reminds me of a low budget children of men, worth watching if you like the genre.

Frank C
June 15, 2012
I think Torres was trying to make a good flick and as a lover of apoc films, I was trying my best to like it but sorry, it came off just way too hokey. 2 stars for good intentions and that's about it.

It was one of those movies that I will probably like even less after sleeping on it.

Jenn J
½ January 3, 2012
Not the best end of the world movie ever made, but it did have its good points. Such as a few cameo stars in the cast, but mostly undiscovered tatlent. Plus, the "bad" guy turns out to be not so bad in the end!

Paul N
November 25, 2011
There wants to be depth here, but there isn't. What you have is a plethora of Biblical names and the stories that they impart pasted over the faintest whisper of plot. Sara is supposedly the key protagonist, but like her Biblical namesake she more often seems to be wandering at the whims of others, bearing a burden she probably didn't ask for let alone expect in the form of a baby. Michael-On-The-Radio, or Scripturally one of the mighty archangels becomes Sara's companion and likely husband, all at the orchestration of the mysterious and prophetically-named Samuel, a "doctor of the soul" who sacrifices himself to save Sara and her baby in a dramatic confrontation with none other than David, the Biblical giant-killer.

It almost pains me to mention that there's a mannequin named Cristos.

None of which comes to anything.

God is not present here, despite an assembling of many of the folks who were testimonies to His existence, Scripturally. The best the movie can advocate for is the idea that "hope abides" - a nod to either a poem by Sri Chimnoy or 1 Corinthians 13:13, or probably both. There is an enigmatic figure of evil here, garbed in black and attended by two other dark-clad and mysterious entities, bent on stealing Sara's child. A rough allusion to Satan's efforts to destroy the Son of God? Perhaps - but to no point.

The scenario is an interesting one. I believe that the cast was capable of far more than they were tasked with, and that the director should probably be severely castigated in this regard. Don't bother watching this. The cast and the scenario are not enough to breathe life into something that perhaps was more compelling on a smaller stage and with a tighter script.

Ole J
November 22, 2011
Naahhh this wasn't worth seeing, Azure Skye and Joshua Leonard along side the rest of the crew do have some good preformances, but all in all this film is not that great and the story is uninteresting.

Dennis A
½ April 7, 2011
Okay, I'm a sucker for the post-apocalyptic movie genre. I'm not sure why though I'm sure a good psychiatrist could figure it out; probably some deep-rooted hatred of society... or President Obama. Yeah, I'll blame it on Obama.

Anyway, this movie was just a notch above horrible. The acting was barely passable, save a few moments here and there. The soundtrack was distracting. Is this a movie or a daytime soap? Seriously, the 'mood' music sounds like it came straight from a made for TV Lifetime movie, but not as good.

As for the story... Um, well. I'm guessing there was a story in there at some point. Basically, 20 years after an unexplained nuclear war and an unexplained plague there is a woman, Sara, who is pregnant with the first baby born in fifteen years (Children of Men, anyone?). I think this point is important though the movie doesn't explain why.

Then there is a DJ named 'Micheal on the Radio' broadcasting from an underground station, a doctor named Samuel who is also a ventriloquist, Sarah's mom, and some other people who all end up together in a cave because there is water there. Stuff happens, one of them gets an old F150 to run on moonshine, more stuff happens, Samuel turns out to be some sort of mystic (possibly an allegory for hope?). Some bad people try to get the baby, some people die, a small twist not worth mentioning is revealed, blah blah blah.

Sarah (still pregnant), her mom and Micheal-on-the-Radio decide to leave in the truck and head to the city to find another DJ. More stuff happens, we meet the other DJ, who is also a ventriloquist, more bad people, the baby is born, more mystical stuff (this time the ventriloquist's dummy), the end.

What I learned... The only people who will survive a nuclear war are hippies and ventriloquists so if I become a hippie ventriloquist I may possibly end up the ruler of the world. I also learned how to spell ventriloquist.

Shan S
½ September 22, 2010
20 years after has a gripping eeriness to it. Too bad the ending left me a bit disoriented - and not in a good way. If the storyline had been given this bit more and it had veered away from post apocalyptic clichés it would have lived up to its promise.

Hopper K
September 2, 2010
i'm not sure what it was i liked about the movie. there was no action, some killing, no blood and guts. very low-budget...maybe that's why. lmao!

Anthony L
June 29, 2010
Azura Skye. Those are the only two words that make this film worth watching, but even Ms. Skye can't save this plotless drivel. Don't go by the description, or the picture, or anything really. Save yourself from this one. The dialogue is incredibly difficult to get through and the inane story puzzles as to why the movie has been kept on this long.

Queenella K
½ June 6, 2010
it's not too clear with the message.. and everything seems out of place.

Amanda Ř
½ May 8, 2010
Probably saw half of this movie.. wasn't too impressed. Though it was interesting.

A Bill M
December 26, 2009
Not good at all. The poster/cover image looks better and is more interesting then the entire "film" combined
Page 1 of 3