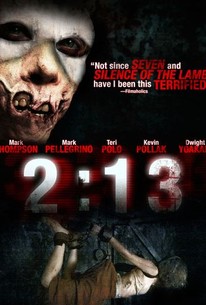 A haunted, hard-drinking criminal profiler tracks a masked serial killer intent on driving him insane in this gritty horror thriller featuring Kevin Pollak and Dwight Yoakam. When Russell Spivey was just a young boy, his mother committed suicide. Shortly thereafter, his father drank himself to death. Today, Russell battles alcoholism while getting into the minds of the sickest psychopaths around. But when the killer Russell is currently tracking decides to get personal, the determined investigator must confront his own demons in order to solve his most difficult case to date.

There are no critic reviews yet for 2:13. Keep checking Rotten Tomatoes for updates!

A kinda low budget TV film version of those thrillers where the serial killer and profiler try to outwit each other. It was pretty good for the budget, I recognised some of the actors at least, Teri Polo of the Meet the parents series stands out. The story is ok, although the ending felt a bit rushed. An ok effort for thriller fans.

Actually quite an original well done movie. The acting was on the cusp of being poor on a couple of occasions but overall a well made thriller. It was advertised as being stomach churning but im afraid that the one I watched was far from it. The plot was good, overall the acting was good but the one problem I had was something I cant really mention without spoiling the twist ending...still most of my friends will get it well before the end.