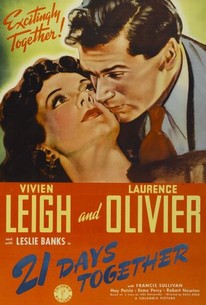 In this drama, an upstanding barrister is up for a judgeship and is terrified that his flaky, playboy brother will cause a scandal and destroy his career. The playboy meets a model who is separated from her husband. When her husband learns that his wife is seeing the playboy, he threatens to kill him, causing the playboy to kill him in self-defense while the model looks on. Later an insane fellow is accused of the killing. He is to be held for 21 days before his trial date. The playboy decides to spend these days with the woman; he will then confess. His brother, who knows what happened, counsels his brother to stay silent so as to protect his own career. In the end, it all works out after the innocent victim dies of a heart attack in jail.

William Dewhurst
as the Lord Chief

The brilliant acting of Mr. Hay Petrie as a decayed and outcast curate cannot conquer the overpowering flavour of cooked ham.

There are no featured audience reviews yet. Click the link below to see what others say about 21 Days!