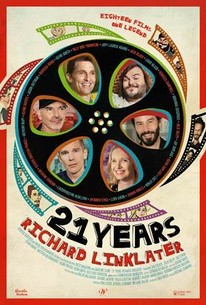 It's been said that the first 21 years defines the career of an artist. Few directors have single-handedly shaken up the film establishment like the godfather of indie, Richard Linklater. From the groundbreaking SLACKER to his innovative BOYHOOD, Linklater has reached the 21-year mark and has unapologetically carved his signature into American pop culture. Get a raw and honest perspective on Richard through candid conversations with Ethan Hawke, Jack Black, Keanu Reeves, Billy Bob Thornton, Matthew McConaughey, Jason Reitman, Julie Delpy and others, and see their stories brought to life through hilarious animated sequences. For a man who became famous for celebrating the cool and casual, Linklater emerges as a surprisingly strategic and visionary director who has already established a legacy and perfected a style that can't be denied. (C) Gravitas

The film's working premise -- that the first 21 years of an artist's career define his career -- is an artificial self-imposition. But Dunaway and Wood toss out that analytic structure from the start.

An amiable but wholly unnecessary movie that plays like a feature-length version of those reels one watches while eating rubbery chicken at a banquet honoring a much-loved artist.

Feels slapped together, something you'd see at an awards dinner, save for the dippy cartoon segments, which considering the subject's creative use of animation ("A Scanner Darkly"), undercut every anecdotal stab at thoughtful analysis.

The luminaries in "21" pay deserving tribute to Mr. Linklater. Soon, perhaps, so will the Academy.

There are great clips and good insight, and it's all as loose and cool as an Austin night out.

The resulting tribute may be a puff piece, but it's also informative and often entertaining.

The massively frustrating 21 Years: Richard Linklater is a perfect example of the difference between a great subject and a great (or even a good) documentary.

A total puff piece, unapologetically so ... playing to the casualness of its director's films, a collection of people having and being a lot of fun.

Every word spoken would feel right at home in an electronic press kit.

21 Years: Richard Linklater is a puff piece about the American indie film titan that lacks the insight and analysis necessary to make it a strong retrospective of a great artist.

Jordan Adler
We Got This Covered

As a stand-alone doc, "21 Years" is not worthy of a trip to the theater, but should be more than satisfactory for hardcore Linklater fans and is essential viewing for newcomers.

They say that a career should never be judged until 21 years have past. Although it's hard to believe, director Richard Linklater has achieved this milestone and now filmmakers Michael Dunaway and Tara Wood decide to shine some light and appreciation on one of the most inventive and daring of contemporary American filmmakers. Sadly, Linklater himself doesn't actually feature in this documentary but we do get contributions from a whole host of reputable actors that have known or worked with him. The enthusiasm from collegues such as Matthew McConaughey, Ethan Hawke and Keanu Reeves on Linklater's intelligence and approach to filmmaking is infectious and their anecdotes and insights into his work are a joy. However, it's only really Hawke (his most common collaborator) who seems to fully know what makes him tick. If you're a fan of Linklater and have a sound knowledge of his work then there's nothing here that you won't already know and the film, unfortunately, doesn't really shed any light on the man personally. Dunaway and Wood's primary focus seems to be a brief commentary on all the manner of genres that Linklater has tackled: Sports flick, Bad News Bears; Period piece, Me and Orson Welles; Western, The Newton Boys and Sci-Fi, A Scanner Darkly, all get a look in while it also highlights his lack of pretension and his ability to dig deeper into more meaningful and intelligent projects. The authenticity of Dazed and Confused and the walk-and-talk theatrics of the Before trilogy get the most focus (the latter being humorously referred to by actor/director Mark Duplass as the lowest grossing trilogy of all time). This focus may, like myself, leave some viewers disappointed that the marvellous work of Waking Life gets very little discussion yet it's probably his most thought provoking film and shadows the fact that Linklater was always a philosopher to begin with and just happened to choose celluloid as the medium to express himself. The tidbit of information I found most surprising, however, was the dialogue throughout his films. Although much of it seems like improvisation due to the encouragement for his actors to be free and loose it's actually verbatim which seems all the more impressively delivered when you look at how his films are structured and, as expected, it explores his penchant for similar themes of alienated characters, the social constructs of America and how he effortlessly evolves through his work while working diversely between Independent and bigger productions. It also highlights the effort that Linklater has made in support of independent filmmaking and how he was influential in helping create the Austin Film Society whereby old film prints could be saved and showed, as well as raising money from filmmakers to help make more films Overall, it does little but scratch the surface and a bit more in-depth analysis to his films would have been welcome but to paraphrase Billy Bob Thornton on the outtakes at the end; "Rick Linklater doesn't need anyone to make a documentary about him. He's fine". However, a film that runs a mere 78mins is hardly demanding and if your a fan of Linklater then it's a pleasant appreciation. Mark Walker