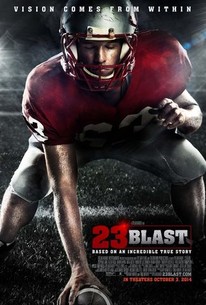 Critics Consensus: The real life story that inspired 23 Blast is undeniably heartwarming -- but the movie itself is too predictable and amateurish to recommend.

Critics Consensus: The real life story that inspired 23 Blast is undeniably heartwarming -- but the movie itself is too predictable and amateurish to recommend.

Critic Consensus: The real life story that inspired 23 Blast is undeniably heartwarming -- but the movie itself is too predictable and amateurish to recommend.

23 Blast is based on the amazingly true story of Travis Freeman. A typical teenager growing up in a small town in Kentucky, Travis is a local hero on and off the field. In the fall of 1997, in the prime of his youth, he is unexpectedly stricken with an infection that destroys his optic nerve. He becomes blind overnight. Under the influence of parents who love him, a physical therapist who challenges him, a coach who inspires him, and a best friend who he cannot bear to leave behind, Travis shows us what true bravery is by competing on the gridiron, helping his team advance to the State playoffs. We follow Travis and Jerry Baker, his closest friend, from the time they meet on the football field as kids through high school. Jerry's attraction to the dark side of teenage temptations, beer and drugs, threatens to pull the friends apart. It is only on the football field where they truly connect.(c) Official Site

A football field is rectangular, but this movie's is hopelessly square.

A fairly predictable yarn that's lighthearted and well-acted, if cast mostly with characters that are little more than tackling dummies.

This is quiet, even modest storytelling, with a surprising final punch, an inspirational tale that never becomes sugary or preachy.

Although the film has moments when it's serious about exploring the challenges that someone in Travis's situation faces, it ultimately prefers to be just another football movie with a hokey big-game ending.

Although the Bakers, and Hoovers' connection to small-town Kentucky lends the movie a sweet, homegrown touch, it's hard not to wonder whether it would've been more compelling (and less cheesy) in more experienced hands.

23 Blast may not be a good movie, but it's honest about what it is and doesn't pander to wider audiences looking for edginess and cynicism.

Despite some solid performances and gritty game footage, emotionally it falls short of the end zone.

On the one hand, it's well-meaning and high-minded; on the other, it's obvious and predictable.

I'll be darned if I didn't react quite often to it the way all involved were presumably striving for. (Full Content Review for Parents also Available)

23 Blast has a tiny budget and an uninspired script, but the bond between the leads is worth cheering.

Movies can inspire us by introducing us to people who overcome the odds, despite having much bigger problems than we do. Most of these films are based on true stories, and are as real as it gets, but sometimes, no matter how amazing the story, it doesn't necessarily make for the best cinema. 23 Blast is one of those films, as it tells the inspirational true story of Travis Freeman (Mark Hapka), a star High School Football player, on his way to a College scholarship, when a rare illness struck him blind. For many High School students, football is just a means to popularity, but for Travis, football was his whole life. His illness left him devastated and almost killed him, until miraculously, with the help of an unorthodox coach and supportive teammates, Travis was able to play again. The story here is almost unbelievable, and while it would make for a terrific episode of ESPN's 30 for 30, I found it severely lacking in content for a feature film. 23 Blast is the directorial debut of actor, Dylan Baker, and while he does a great job of telling the story and inspiring the audience, there just isn't enough story here to keep people interested for a full ninety minutes. The film focuses a lot on Travis's depression and rehabilitation, while a key component of the story, it also takes up a good majority of the film. If one were to shorten those scenes, there wouldn't be enough for a full length film. As for the young cast, they turned in surprisingly strong performances, in particular Mark Hapka, was excellent, but in the end it all comes down to this. 23 Blast, while inspirational, also moves extremely slowly, as it keeps coming back around to a single focus, Travis's illness. There is no deviation from the main story line, and things continue to go around in circles, until the last half hour or so when they finally get to the point. Basically, I loved the story, Travis Freeman is an inspiration, but the film is a bit of a snooze.